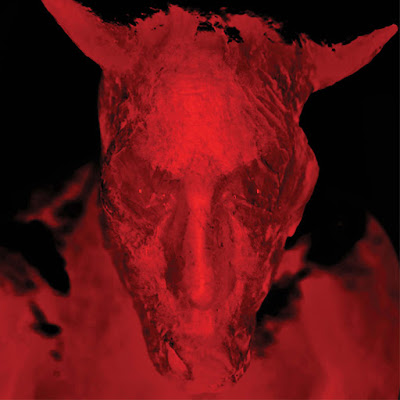 Originally used as part of an art installation she did, the rule here is we are just listening to how the song stand on their own, when you strip away any pretenses that are attached to them. The theme is the inspiration taken from images of gargoyles that were left battered from World War I, given how things do not change and the locations of this kind of destruction simply relocate then it is a fitting theme for 2022.   One thing that struck me is how minimal these arrangements are for someone who takes their voice to bombastic extremes. She can almost be thought of as the goth Yoko Ono in this regard. One thing that you can say is consistent with her work is that it is dark, satanic wolf howls as it progresses. There is a more tormented sound to the second piece. It dips now into a more whispered wonder land of whistling noises.

Her vocal experimentation is perhaps disturbing if you have never heard her before, but fans or those familiar with what she does have heard similar within the context of songs or performances that were more structured. There are different forms of sound manipulation and feedback than we have heard from her, if you are fan of Mike Patton's more stripped down and noisy vocal stylings this sort of thing might not feel as aliens to you. Are these the souls of Goblins being roasted by the shelling I under as there is a thundering noise in the background that could just be breathy on the microphone with the EQ or effects applied to it, as the more robotic voice filter used in the first piece makes another appearance toward the end of the second piece.

I am a fan of Galas, but this is a trip to a museum that turned out to be an abstract haunted house. You might feel compelled to listen to this for an experience, but these are not songs that you will want to listen to more than once and even then, I had to break them up in ten-minute intervals to avoid the tedium, so based off songs and measuring this album against the standards we have for songs I will give it a 2.5. I find the darkness conveyed her to the really only point of redemption.