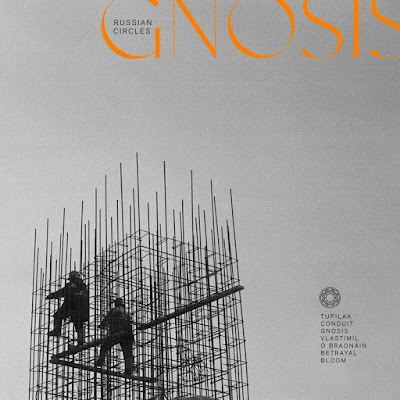 We do not have to question if these guys are good musicians. 8 albums into their career, they are a safe bet. Where they have to prove themselves with me is when it comes to being able to keep me engaged as an instrumental band, since vocals are where my ear goes. We have reviewed at least half their album here already and they have a decent track record of being able to do this can they keep it up? The opener is dark and dynamic with a brooding tension hovering over it like a storm. There is less post rock wandering and they have pretty much just become an instrumental sludge band. The chugged tension on the second song, is not the sound of them re-inventing the wheel, but they are locked into what they do really well. It is heavy, but can they continue to engage my attention for another five songs?  Live they are loud and energetic, so it is easier.

The title track sees atmosphere creep in as they let their feet off the gas. The manage to occupy the space where vocals would be once the groove kicks in. The album's problems do not come to the surface until you get to "Vlastimil" as the songs begin to run together and sound the same. It starts off in a more doomy mode and lumbers it's way into pretty predictable places from there. Yes, they dabble in black metal, but I am not feeling the darkness only hearing the sonic notes they hit to get the sound. Part of the problem in how things run together is that the fifth track that wanders into an interlude of post-rock minimal guitar is under two minutes so not a real song and feels just like a break down that "Betrayal" that follows explodes out of. It picks up with the kind of blasting that the fourth song left off on.

The album closes with "Bloom" which is Explosionsinthesky style post rock, that is flowing, but pretty mellow. Sure, there are pleasing sounds but is it any different from other bands we have heard this same kind of thing from already. I will around this album down to an 8.5, they are masters at their instruments and work with what they are doing well when it comes to song writing but by now how could they not. If you are a fan then this is going to give you what you want from, them and pleasing to the ears to just leave on and let play. Not really something I am personally going to listen to a great deal more but can hear it for what it is which is a band well into their stride, who accomplished what they set out to do.