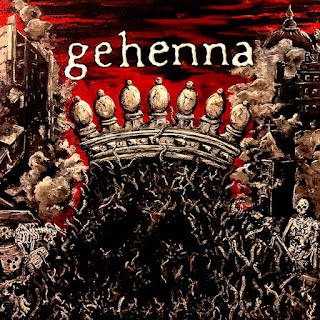 This West Coast band has been churning out blackened punk for sometimes, there earliest days finds them more on a thrash side, but they have only gotten darker and more discordant with age. This album is no exception. The opener is almost grind-core. At just over a minute, they punch a great deal of chaos into one song.  In fact, the first four songs are all around a minute and half long. "Like Maggots' is more straight forward. By the time we get to "A Return to Simpler Times" thing are leaning less in a black metal direction and more towards their punk sneer. Even at their most punk there is still a sense here that they are stomping around graveyards ominously.

When they fully commit to old school hard core the results are less impressive. To the point of almost feeling like a GISM tribute band. I am sure they also admire GG Allin.  They do a great job of capturing a nihilistic feel on "Empty Wasted World". This is the vibe they should stay on and thankfully do for "Know War/ No Peace".  It is the kind of grim anthem we need for today's world. They go with a more thrashing sound that brings to mind their earlier work on "Death in Disguise". It is ok for what it is but, after the last two songs feels more dialed in. We know what they are still capable of and that is what should be expected for them to live up to. Instead, we get the more racing punk of "Black Sun Valley". The vocals remind me more of early Slayer without the falsetto screams. The more deliberate stomp they go into is cool, but the rule here is cool riffs alone does not a good song make.

"Masochist" is 59 seconds of grind core like grit, that ranges from sounding rushed with speed to more of a break down within that minute. Not the greatest song writing and not bringing anything new to the table. The title track that closes the album is more impressive and stands alongside "Empty Wasted World" and " Know War/ No Peace" as an example of what they are capable of when they focus.  I will give this album an 8 even though there are only three songs I feel knock it out of the park, as they are good at what they do the question runs more along the lines of is what they do for me. Some of the times it is, all of the time they are committed to what they are doing.