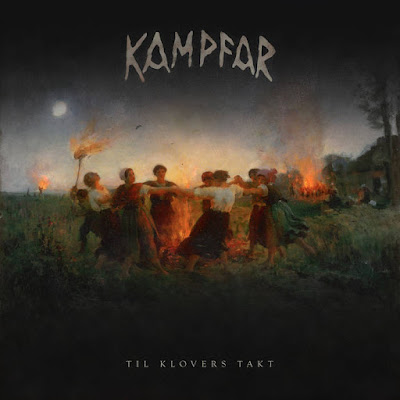 There continues to be a lot to love about Norway's Kampfar who allow their sound to get bigger and more melodic. The band's 9th album finds them still playing black metal, but not allowing themselves to be limited into the narrow confines of what they genre could be compressed done to if more homogenized. It stands to note that having been making music since they mid 90s they are legit true Norwegian black metal as much so as bands more commonly thought of in the role like Mayhem.  metal the chorus to the opening track is sun, but the throb of the song is not hampered in any way by this. There are blast beats on this album these guys just do not live and die by them.
They use many woeful folk elements without an ounce of frolic to them. The mood to a song like "Fandens Trall"is a balance of aggression and a more adventurous Viking streak. The chanting is a low and eerie when it creeps into the song. They are kind of occupying the space Dimmu Borgir once held, though not a grandiose or symphonic, rooted still in the pagan culture and less invested in satanic theater. Like Dimmu their singer plays drums. He still fills the role in the studio where Dimmu has been through a few drummers at this point/. "Flammen Fra Nord" is more of a scathing blast fest, thus conforming with the expectations of black metals more hateful side.  They only hit it that hard for the first two minutes before more melodic and sung sections evolve. it breaks all the way down to a bass line.
"Rekviem" thunder down a similar sonic path. It stars off at a more rapid pace that they gradually gain control of as the song unfolds. It ends up in that big epic march much of their music in recent years as thrived in.  The sonics shift and darken for the last song which manages to stand uniquely apart from the previous song as it bears different sonic colors that open new doors for the band. Even dabbling in things as small as vocal effects makes a difference.  I will give this album a 9.5, as it finds the long running band still offering fresh takes on familiar sounds, we have heard from them before.
Posted by Wilcifer at 1:19 PM