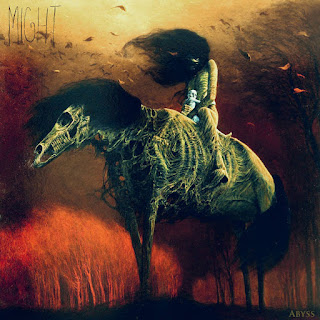 This German band blends a range of interesting sonic colors and sounds into their songs. The first track is just a minute intro leading to the heavier "Lost" that works off a mighty chug contrasted by their very organic personal sound. They rumble around the shadow side of sludge in a manner similar to mid-period Kylesa. Female vocals adding a tender touch to the ominous rumble, whose mood is just not dark or despairing enough to be doom. They can kick up dense earth-shaking riffs, but balance this out with somber melodies that oddly carry a brightness to them.

Feels of heaviness and darkness are like the funk you cannot fake them. Drug Addicts and the mentally ill tend to vent this most effectively not matter where they are at in their struggles. These kids are pretty well adjusted. There is a skip in their step when it gets to the metallic infused garage rock flirted with on "Circles". Where normally I would want this to be darker, the way the blend colors and feeling not often explored in this sort of music makes it something new to your ears. Sonic Youth almost comes to mind in how the song flows. They are diverted into more dramatic folk like that vocally sounds closer to Rasputina and then later shift more into a more typical folk feel. Ana Muhi proves she has a pretty decent voice here.

There is a straightforward Melvins like rumble to the heavier chug empowering "How Sad a Fate". "Shrine" does start from a buzzing black metal like pummeling and go into something more punk. The male vocals are what gives their sound the Sonic Youth quality. The dynamics shift a great deal in this song, and flow back into the more feral buzz of guitar. "Lucky Me" is kinda crusty and ends up going to some interesting places before thrashing out. The harsher vocals are more dominant here so if you are the kind of person who prefers harsher vocals maybe start with this song and work your way back/."Dear Life" is another slow piano song with a more Diamanda Galas like vocal this time around. If asked what would be a song that best showcases the band's sound this would not be it. "Holy Wars" it's more like a post-hardcore ditty, really well written and makes an argument for the male side of this band to take over the mic a little more for the more rocking tunes. I will round this down to a 9 as the piano songs at times diminish the album's momentum. Overall, it is an excellent listen that blends genres in a very organic manner that makes sense and works well.