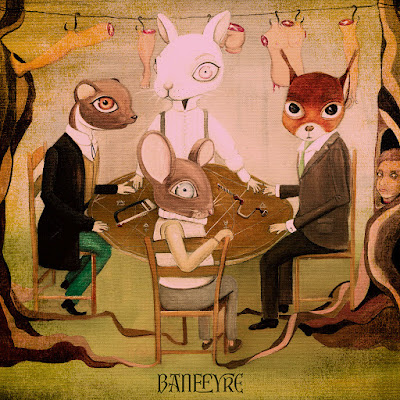 Not the first album we have reviewed by this progressive project from England whose ever-shifting line up has featured members of both Hawkwind and Mogwai. Twelve albums deep into their career they have conjured a more thematic feel. The theme being the witch as the outsider. This lends itself to a darker, more stoner ride, 60's Coven like pulse. The them often carries itself sonically as the pulse of a few songs feels like they are picking up where the previous song left of which is where "Ghostland" finds itself. It has a heavier thump when the beat comes down on the one. The chanted chorus of vocals that began their invocation continue with their intentions here.

When their new male singer Joel Segerstedt takes the mic, the result is in a more rock direction. It is dark and most punky, but also very organic and not working off tension alone, so takes on a New Model Army like sound. The titles track finds the two singer's voice intertwined well with each as they coast with a big sonic sound that is flowing in its melancholy. There is more of a post-rock shimmer to the grandiose "Rose of Jericho" , six minutes into the song it takes a shift back into the darker New Model Army direction. It almost sounds like two different songs but still works. Of course, I am not going to complain about a band moving in a darker direction.  I like the refrain that "Blackout  77" builds into the rest of the song flows of a pulse. There is a more delicate folk feel to "Down the Rabbit Hole that builds into something with more of a impending storm hovering over it. Given the scope of what they do some of these sprawling ten-minute pulse epochs seem to make the most of their time. It goes into a more soaring post-rock feel without the minimalist feel of that genre.

There is a smokier shadowy vibe haunting "Everything is Beautiful But " it falls somewhere between the Cure and Chelsea Wolfe in the balance of guitar and vocal melody. The next song is one of those moments where the mood carries over from the previous song with the guitar taking on more of a drone. The vocal melodies are not as hooky as previous songs, and more of the flow of atmosphere. "I'm Ok Not Just Alright" at this point the album has now strayed from the witch theme and is focusing on various depressed moods which is fine for me. As fa as the song does, I like the dynamic twists and turns it takes.  "the Scene is a False Prophet" indulges more in atmosphere, it coasts along in a dream and breezes past. I like the more gothy place it builds into. The album ends with a metal song, that is almost out of place due to the harsh vocals and everything but done in such an organic manner it makes sense,. Overall I enjoyed this album a great deal to do the darker direction and will give it a 9.5.