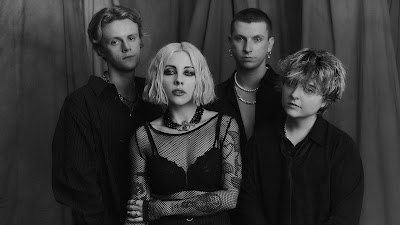 My not so guilty pleasure band who pretty much falls in line with Chrvches frame of my listening habits. Even though this is more of a teenage angst ridden pop punk album it still holds plenty of common ground with their previous albums. There is more guitar driving the bigger hooks this time around. She does a really good job of harmonizing her vocals on the emo power ballad "the Hard Way" though I am not sure how that would translate live. It's been less than a year since their last album, so they really busted in out when it comes to song writing unless these are leftovers.

There is more rock grit to the anthemic "Jealousy". Here vocals are produced in a way that gives it a more pop sheen, though it feels a lot like Paramore here. Almost intentionally so. "Alone" sounds a little more like what they do except for the big explosive chorus, they are done with any darker goth trappings no matter how they dress. There seems to be a little too much formula in play on "Clean" which does feel like it could have been on the previous album. "Without You" is another power ballad, it works better than the previous song as the more melodic elements leading into are more interesting and emotionally complex. "Only Problem" leans in a more of a pop punk direction but is a better song. "You're So Vain" is not a cover of the Carly Simon song, but a very guitar centered song.

"Reasons to Live" is a middle ground between the pop punk and what this band used to do. Lyrically it comes from a very co-dependent perspective. Heather's voice might be at her strongest on the high notes she hits on "Numb". Some of the upbeat rock anthems have a similar feel to when Kelly Clarkston tried her hand at rock music. I think they retained enough of who they are to avoid this album being a sell out since they had begun progressing in this direction on the last album. I kinda of hear it not as I hear the Kiss albums after they took the make-up off and blended in more with the hair metal of the day in the 80s . The last album might have been more 'Animalize" while this is "Crazy Nights" I will round it down to a 9, which still puts it a head above most pop music these days.