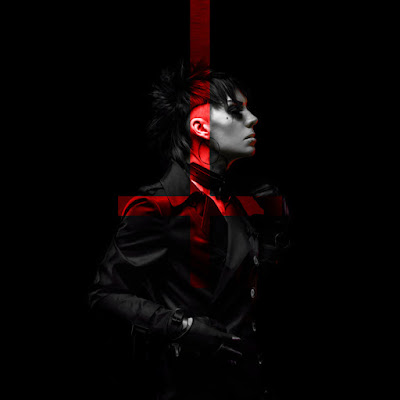 The 7th album from the dark industrial projects, continues down a similar path though the focus this time around leans more toward gritty electronic beats and the darker vocals seething from the shadows rather than the almost black metal screeching we have heard from them on some of their past releases. The opening track is more of an intro and things get darker and sonically heavier after it. "the Poison Will Deaden the Pain" is a harrowing bleak sound, but not as focused of a song. The beat that sets the stage for "Off With Their Heads" lends itself to the groove of song writing, even if said groove is a sultry march into the underworld. The now we do what they told us, kind of plays off the Rage Against the Machine theme, but with a more shadow drenched sneer skeptical of what any opposition does, yet the spirt of it is a vengeful undercurrent.
Where their previous albums leaned more in the direction of scathing anthems, things here feel much more personal and held closer to the chest rather than waved like the flag of a rebellion, when things get bigger and more in your face on a song like "X's On Her Eyes". The sung vocals work really well here, not the best singing that will make Trent Reznor question his status, but a needed shift to add a different color to their sound. It has the punch of old Marilyn Manson. It is interesting how things are more introspective, when you consider how these guys have always sounded like they were screaming out the soundtrack to the end of the world and now that the symptoms of the apocalypse are closer in the reality of that has settled into the lyrics here. This makes a song like "Catastrophic" hold more weight even when they are holding back, with a less confrontational and more speculative mood.
There is an ambient synthwave like piece that precedes the last song, making it two instrumentals that are not being counted for the purpose of grading the album. It should have just been the first few bars of the last song, but you cannot fault a band for testing the waters and trying something different. "Blood Out" is the last song and mood wise it picks up where the piece before it left off. The vocals are more whispered and there is that industrial ballad feel to it. It's not like the power ballads of rock bands as it is a creepy cinematic piano vibe. The lyric " I do not want to know / why you never believed in me" is more sung than most of the vocal's efforts invested in this album.  Instead of giving you the big riff ending, they let it just disappear into a fade. I like this album but will give it a 9 as it is not as aggressive as what I normally want from these guys and becoming more melodic did not go as I would have planned if, but if you are a fan, it is hard not to love what they did here instead.
Posted by Wilcifer at 8:58 PM