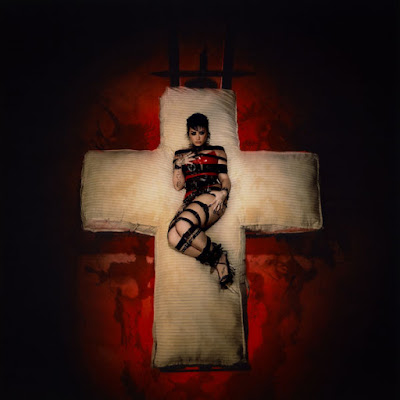 This is not the first pop album we have reviewed here and perhaps this one is even more deserving since she is trying to make a rock record. She has dabbled in rock before and seems to be putting more of an effort here. The question is when it comes to a pop artist crossing over, can she live up to what Miley Cyrus did with "Plastic Hearts" ? Seem a fair measuring stick. The first song is a mess. Yungblud contributes to it and brings nothing to the table. She does a much better job with "Skin of My Teeth". This was the lead single and what first sparked my interest. It's Paramore flavored pop punk but works for what she does.  "Substance" is more pop than rock, and not as compelling in its hooks.

There is a more of a Taylor Swift feel to the cadence of "Eat Me" . Musically that experiment with electronics in much the same way Poppy does. Royal and the Serpent contributes to it, but while better than what Yungblud, nothing mind blowing.  The title track is pretty decent, some of the phrasing is not as airtight as you might expect from a major label pop release. So far is not close to Miley's level but we are only 5 songs in, so perhaps it is too soon to say, and the rest of the album is going to be slappers. "29" the chorus of this song works well the verses are not as polished at the could be. The lyrics are trying to hard, and it makes sense she would come out as gender whatever, to keep her name in the press and drive an album like this.

"Happy Ending " works better as a stripped-down ballad. This feels more like who she is than the other songs where she is generally trying too hard. 8 albums into her career at 30 you would think she would have a better sense of identity at this point in the game. The ode to masturbation titled "Heaven" has a playful Marilyn Manson like swagger to it that works for her. The more upbeat pop punk of "City of Angels" is not as effective, but rocks more than most pop you are going to find on the radio in 2022. "Bones" flows better vocally, though the mix is too clean, and the album need more bass to have any kind of heavy feel. The chorus works better in this regard than the verse, but she is working with pros at the top of the industry so it should be flawless in this regard.

"Wasted" really bring out the fact that the status quo for this album is to rock about as hard as Pink. Which is not really at all. More than your Ariana Grandes? Yes, but what does that really say? Unlike Miley I do not think Demi has the musical vocabulary to go about this with the same legitimacy. Miley had Billy Idol and Joan Jett, she has Yuingblud, that speaks louder than anything else we could really say about this. The nail the U2 guitar sound on "Come Together" but it is generally Dollar Store Taylor Swift. She can belt it out with perhaps a little more power, but the higher notes are auto tuned. Singing about dead friends, really seems like cashing in when it is over upbeat watered down pop punk, Dead Sara, does better than the album's other collaborators. JT Daly of Paper Route helps out with the writing on "Feed".  It is a piano centered ballad with typical pop beats that go over this sort of thing.  It's kinda bland and lacks any sense of danger that makes rocks music what it is. Getting sober has not earned her the kind of street cred she is milking for. The album does have its moments, but I will round it down to a 7.5, for not having the balls to rock or sell me on the fact that she can as Miley did.