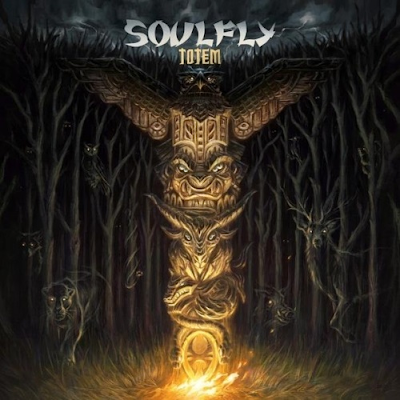 It has been a while since I have listened to Soulfly, though I am a fan of Max era Sepultura and have never been all that impressed with anything the band has done since the split. Imagine my surprise when I check back in with this band to find them kicking so much ass here.   Gone are any of the nu-metal leanings that might have colored earlier releases. In fact, they are at full on thrashing speed when the album opens, but more like Slayer than even the "Arise" era of the Sepultura. Max has admitted that the "Reign in Blood" album was an influence on it. Max's song Zyon plays drums on the album. He has grown into being an impressive drummer. "Scouring the Vile" finds these guys sounding more like Sepultura then Sepultura does at present. The album is really well produced as it has a hammering intensity to it. The guitar tones is pretty biting when they thrash out on songs like "Filth Upon Filth".

The Slayer comparison could resurface again on "Rot in Pain". Though this would be a sound more like newer punk tinged Slayer that in so aggressive it forgets the groove of cool riffs for the bulk of the song, though they still find their way in. The first really fucking awesome song in terms how it commands you to head bang is "the Damage Done". The title track is also another song driven by a heavy groove that crushes it way into your ears. Max's vocals are solid for what he does, they sound like he has not aged. Halfway in an it is safe to say this album is demolishing the last Sepultura album. "Ancestors" might not maintain the flawless momentum of the two previous songs, but it is pretty solid in its own right.

There is an instrumental that could have just been woven into another song as an intro formulated into a song in itself as it feels more like an interlude in the present form. "Spirit Animal " closes the album and works off a powerful locomotive chug. At nine and a half minutes the song has plenty of time to simmer in the atmosphere it builds off before gaining speed. Richie from Incite lends his voice and Chris from Power Trip throws down a guitar solo on it. I will give this album a 9.5 and see how it grows on me. It is pretty impressive as it is and not what I was expecting from Max this late in his career.