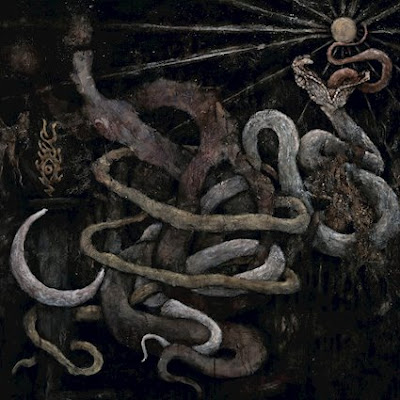 This is the Italian band's 4th album; comes after a six year wait. They chug out a style of death metal that is acidic in its hatred.  This was very effective in getting my attention and giving this album a chance, but faces the problem most bands who are this heavy do, after the pummel my ears and the initial sting wears off, I find myself asking, "Ok, you are heavy, but can you write a song?"   The vocals area scowled growl, more mid-range than gutturally low. More aggressive and less emotive than say black metal vocals. They slow down some for "Devil Incarnate", very heavy and hateful there is a great deal of conviction that makes me feel like they could be down with darkness in earnest.  Metal bands love to play around with this kind of imagery and subject matter, but if I am getting vibes of darkness after hitting a vape pin from you then there might be something there.

This does not carry over when they give in to their lower urges and just bash out death metal. They are good at this kind of raw edged fury, but does not carry a great deal of identity, they could have formed this more before the need for sped overcame them.  By the time your ears have crashed into the wall of sound that is "Crypt of Existence" it is riding the line to becoming just an attack of white noise. A few guitar parts shine out of this, just enough to make it music. The barrage that is "In Chaos , In Death" sounds like the drums are being attacked by cyborg wolves. Not much in terms of song writing, but they have a sound. "Abysmal Annihilation" is closer to a song, but very one dimensional in terms of dynamics and no melody whatsoever.

This album becomes a case of a band being so into their heavy sound that once that is dialed in the do not care so much about the song as they do assault you with speed and volume. You can hear the notes in the riffs if you listen for them. The best heavy band have riffs that you can still sing, rather than just blunt instruments to torture the ears of the masses, The titles track is another blitzed out barrage of ringing cymbals and scowling growls. The guitar kinda buzzing into the murk of the background. Part of the problem in the intentional, the production intentionally blew everything out with gain to get this sound, no noise gate.  I think a 7 is a fair enough score, they have potential and are aggressive as hell, but to the downfall of the songs. Yet if you are into this thing, they are good at what they do, but still nothing new thus a 7, which is being masters of a sound that is feral death metal.Being released on Season of Mist