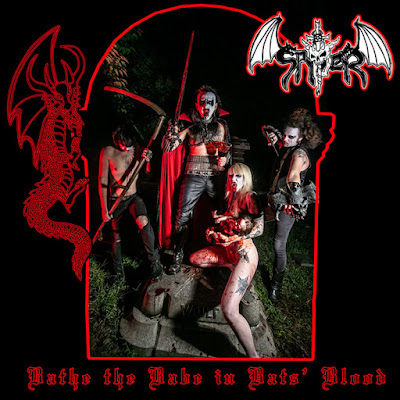 The short review here is if you like Devil Master, then chances are you will like these guys. Also, the chances are you are more of a punk than a metal head. These guys have more in common with Gism than Darkthrone. With a band like this the first song was fine with me, I like my share of punk. Am I more into metal? Yes. The bulk of the punk I listen to leans more towards hard core or early stuff that is more rock n roll. With that said the first song works for me, but when they speed up past that point and it begins to feel rushed and sloppy, that is where the appeal wanes which is what happens on the second song. "Tortured Soul" falls somewhere between the two. The vocals seem more purposeful, so that helps their case as song writers. Is it as good as Darkthrone's albums that fall in this direction? No.

"Transylvanian Night" has the punk snare smack that I am not that fond of. The vocals try to go into more of a death rock warble in a few places, but as a whole I am not that impressed. It does break down into a bass line which is an old punk trick, but ti does make you feel they might care about the song. The first song that is actually metal is "Foreshadow". There is more of a thrashing feel to it. Having grown up during the time of this kind of cross over, I think it is true to the time period. So far it is the album's best song. They get more deliberate on "Living Nightmare". The chords are allowed to ring out more and make things darker. That is up until the two-minute mark when they blast off again.

They make an attempt to sing on "Full Satanic Power" rather than the rabid snarling that has dominated the album up to this point. This like most of their teasing attempts at melody is fairly short lived. There are some thrash gang vocals when things speed up to the pace most to this album attack you at.  "Spider Biter" starts off with a pretty decent riff before it resorts to the same kind of blasting that has become a blur throughout this album already.  It also ends the same way. This album does have its moments and is what you want from punk rock dressing up as a metal band, I will give it a 7.