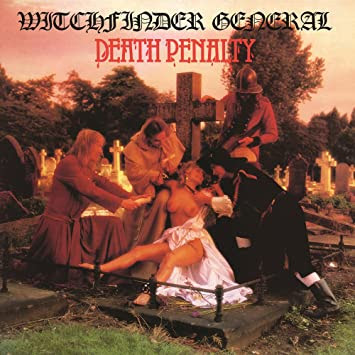 Doom bands suckling from the teat of Sabbath is a long running tradition going back all the way to 1982. The thing about it back then is bands also brought other influences to the table as can be heard on this band's debut. The squeals and squeaks trying to be metal yodels are kind of funny, but over all this band seems very earnest in what they are doing.  At times the melodies churn more like Blue Oyster Cult. "Free Country" moves at a faster pace, with a pounding chug, as their singer proclaims let's trip on LSD.  This is a very rough and raw mix, that works perfect for what is going down here.

The title track works for what they were doing, and I appreciate there is less boogie and more of a darker undercurrent. Aside from that there is dynamically not a great deal of new dimensions being explored here. "No Strayer" is more like if Diamond Head had been listened to southern rock and wanted to throw in some guitar solos to jam on. The song "Witchfinder General" is pretty heavy, I general likes when a band names a song after themselves. I like the chorus, as the vocals go in a different direction for a section as he sings more from his chest voice, where the vocals have been fairly basic throughout the album.

"Burning a Sinner" is more mid paced and punchy. There is another vocal shift on the chorus, which helps as dynamically the vocals have not been the album's strong point though to their credit his voice has a honesty to it. He sounds like himself rather than trying to sound like Ozzy. The guitar solo is balls to the wall. The cowbell of "R.I.P" closes the album. The vocals get a more nasal cock rock sneer to them, this makes this feel more like hard rock than metal. I will around this down to a 9, as the rawness of it finds it not a fined tuned as it could have been , but for what this is it works.