Hours of Worship : " The Cold That You Left" 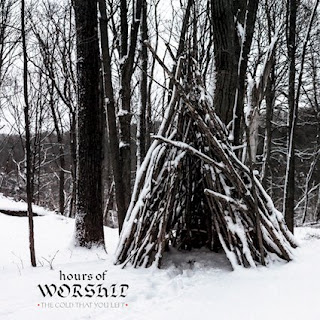 If Drab Majesty was darker and had a more oppressive lo-fi production, the results might be similar to what is going on here. Low goth vocals grovel under a wave of synths swirling over them. The vocals stay buried in the mix of the second song, that I at first mistook for the first song droning on. Closer listen reveals there isa great deal more shoe gazing going on. The core elements of their sound do not change to the point of giving this a monochrome dynamic. The arrangement of "Watching You Beg for Your Life" helps the mix, as a song emerges from the mix, that is almost like a synth driven taken on Swans, until the song progresses and then the drugged-out pulse of things makes me think more of Psychic TV.  Vocally I can hear Death in June being another influence of this band. Though the vocals are a starker baritone.

From the bands whose influence I hear creeping from the edges of these songs, they have a good sound, I am just going to need to hear more songwriting, as this album progresses. If it continues to just float down this kind of drone, I will get bored before I am halfway into the next song. The vocals take on a deeper croak with "Ancient Pain", but there is less form and function amide the ambiance of the synth serving as the sonic backdrop here.  "Deep Depression" has more going on musically. The vocals do not change, though the lyrics are more easily discerned as the synths take a step back. String synths build and the reverb-soaked guitars fight their way out from under them on "A Wretch a Liar", which has compelling sounds haunting the sonic space but no real direction aside from that. The guitars are just another sound and nothing in the way of riffs to give structure.

"I Know It Hurts You " is even more atmosphere, dressing the song up with no place to go.  The synths do create a riff feel in their progression. Th waves of shoe gaze that still wash over the song keeps you drowning in the dream. "There By the Window" is not as sonically heavy, but it is a better song as everything even your ears have room to breathe. This space makes the song easier to make out.  The heavy-handed ethereal nature of the last song throws the darkness off balance, it becomes like across between Coil and Switchblade Symphony which I am sure some band signed to Cleopatra Records  already did that . The fact this is so super dark most of the time, works for me and makes up for the low production value. I will give this an 8.5. The mood should sell you if you are into goth. Being released on Iron Bonehead.

Iron BoneHead Productions · Hours Of Worship - Your Lonely Death My Crown
Posted by Wilcifer at 3:50 PM