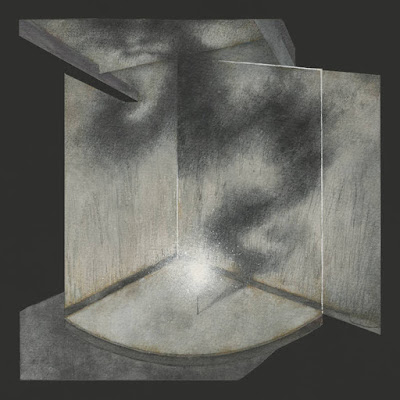 This might be the debut full length by this crushing band from Denmark, but their members have been around the graveyard a few times. With members having done time in both Conan and Grave Miasma. The vocals are low and commanding in their growl. When the song goes into a more punishing pound, they have it coming from this haunting pit of reverb. It sounds more like it was recorded in the basement of a haunted house than in a cavern. Where bands like Incantation sound like they are sailing on the river Styx, these guys feel more grounded and organic. Things begin to speed up on "Entrails of Chaos" to slow back down to more of a death doom pace, when baritone singing chants up from the background.
The roughhewn production of this album is perfect for what they are doing here and plays a key role in the overall sound of the band, though IU am sure with the aid of high volume all of this can be captured live. Two songs in and it is clear this band is oppressively heavy but still gives a fuck about songs. The third song "Sadistic Mind" just kinds of stomps past. It is not a bunch of blasting as they are very deliberate in how they mangle your ears. Of the first three songs the first two are more impressive in terms of composition and hooking into you. "The Reptilian Drive" is more than likely about the lizard brain and not shape shifters. Looming with the doomiest of intentions, it takes some time for the drums to get under the song and carry it along.
The album closes with the lingering apocalypse of "Perpetually Circling the Void". A sludge out dirty take on death doom. The vocals stay at a similar low growl. Less engaging than the other songs on this album, the 11-minute mammoth, plods with heavy stomps of guitar as it gradually builds. Yes, it is heavy and for some that is going to be enough. For me I am going to give this album an 8.5, as the mood is solid and the heaviness top tier, but not sure the songs are catchy enough despite all of that to make me listen to this a great deal.
Posted by Wilcifer at 6:05 PM