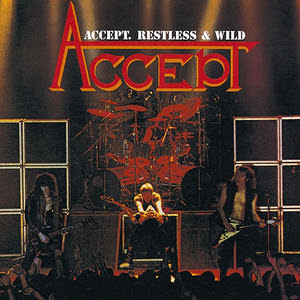 This German band was ahead of their time and clearly and influence on creating thrash as a genre as they are already halfway there with "Fast as a Shark". The band's fourth album and they had clearly honed their sound. This is a band I gain more respect for as the years go by. The gallop of the title track is pretty powerful, it is amazing how heavy this is for its time. When this album came out, I was really only into bands that wore make up like the Crue or Alice Cooper, which is a shame as the head banging is dialed up further for " Ahead of the Pack". Sure, I have always felt there was some homo erotic leanings with this band, but musically they are solid as hell.

They continue to press forward with heavier sound than they are remembered for with "Shake Your Heads". Udo's gritty voice sounds great on this album I like when he goes into his lower grumble to give some contrast. His limitations he works around when things get more demanding like the increasing melodrama of "Neon Nights". This shows the band is capable of more than just having their balls to the wall. At six minutes for the 80s it was a long sprawling epic. The guitar solo on this one is pretty fucking cool. "Get Ready" is a straightforward rocker. It is the first song that feels more like filler when you consider how heavy the first half of the album was. They get back to the heavier side of things with "Demon's Night".

They have always shared a common ground with both AC/DC and Judas Priest, this can be heard perhaps best on "Flash Rockin Man" though the Germans are heavier than both of these bands, of course excluding the "Painkiller" album.  "Don't Go Stealing My Soul Away" is typical of  the 80s arena anthems that rely on major chords which I am not the biggest fan of.