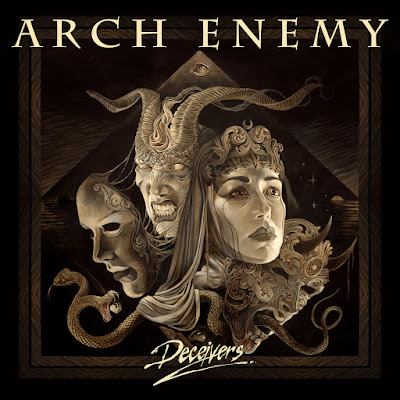 This band was like a more mainstream take on what Carcass did on "Heartwork". They changed singers, and I would suggest perfect their sound, when it comes the overt hammering of a song like "Deceiver, Deceiver". they sometimes make lateral moves. The vocals pf Alissa White-Gluz, have expanded the most. She now goes into a Nightwish like clean tone that is impressive. Sometimes they are given more room to shine than others.  Jeff Loomis who has not been with the band since 2014 throws in hi notable melodic shred. For all their talent on a song like 'the Watcher' they prove themselves capable of just sounding like everyone else. Sure, there is a cool riff here or there, but the rule here is cools riffs alone does not a good song make.
There more melodic most help to distance themselves from the pack, but when they grind down into more thrashing moments like "Sunset Over the Empire" there is less to keep them from being one of the faceless masses in terms of what sets their sound apart. The grooving almost Slayer like riff before the solo is pretty cool, but aside from a bigger and more professionally polished sound this could be any band. The more commanding gallop of "House of Mirrors" corrects this to some extent. It reminds me more of when Angela was in the band. Gluz is more versatile, but I think Angela's growl gave the band a more defined sense of identity.      Though many of the riffs to me sound like Megadeth "Spreading Black Wings" is one of the album's best songs, in terms of hooking you in with melodies.
"One Last Time" runs along the lines of what you expect from this band. Some whispered vocals break things up, she really doesn't use her singing voice much and I think that fits more in lines of what this band's brand is. There is often a line in the sand between, what is the band effectively doing what they do and writing songs that make me want to listen to them again. I really only like the Angela era and have not been wowed by this line up, though they are great musicians who are good at what they do, I will give this album an 8.5. Not blowing any minds, but if you are into them this is what you want.
Posted by Wilcifer at 1:06 PM