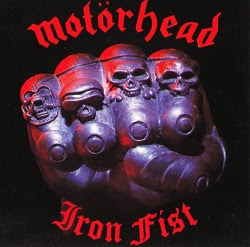 >This year is the 40th anniversary for Motorhead's 8th album, which would be the end of the three amigos line up as Eddie Clarke left during the tour that followed it. The title track whicThey maintain a similar guitar attack on "Heart of Stone" but I do not think the song measures up to the bar set by the opener. The band has a few songs about playing Dr. "I'm the Doctor" is one of their more effective stabs at the topic with more of a straight-ahead rock n roll vibe to the song.

When you really listen to what they are doing Motorhead is more of a rock band than a metal band, though this song is one of the exceptions and "Go to Hell" a song that is actually metal. These guys are always very straight forwards rock, which they sell pretty well, "Loser" is just a song that doesn't connect with me as much. "Sex and Outrage" is another one that is more punk paced. This is more punk than it is metal, but it is a fun song. The groove of "America" makes it another one of the album's best songs. Lemmy also comes pretty close to really singing. The up-tempo " Shut it Down" is pretty much color by numbers Motorhead.

"Speed Freak" has a catchy riff wedged into the chorus and great guitar playing all around but as a song, kind of runs together with all their up-tempo rockers. The drumming has always been top notch, but I really like what Taylor does on "Don't Let Them Grind Ya Down". This is another song that is more metal than rock n roll. The best bass tone opens up "Don't Need Religion" which is also a pretty solid song, as it is more deliberate in its stomp.  "Bang to Rights" closes the album with a straight up rock beat that moves at more of a punk pace with its reckless abandon.  I will give this one a 9, it's a solid outing, and great by anyone's standards, but this is Motorhead we are talking about so the bar is high, making this not perfect but fun.