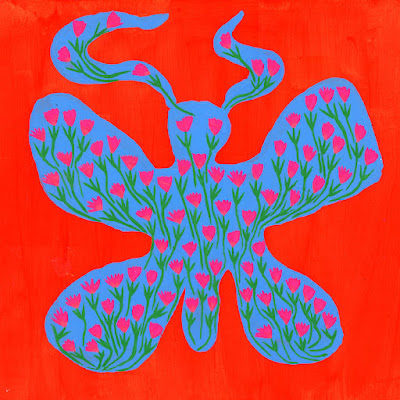 This trio comes from Chicago by way of Atlanta. It opens with a moody reflective ditty where they vocals sounds like Radiohead's more stripped-down musings. Balla projects his voice more on the single "Bad Love". It feels like if Tom Petty was more emotionally fragile and not trying to be Bob Dylan. Emily begins to take over the mic more with the bouncing pop of "Bop", which is a very fitting title for the song. Then both singers split the duties on the ambling Brit pop tinged "Clear". The guitar rings and jangles nicely the bas could stand to be pushed forward in the mix as the simplistic drums do not form enough of a backbone on their own.

Most of their songs fall under three minutes, yet they manage to cover a great deal of ground in that time frame. Their drummer sings on "Hold". His lower voice does add another vocal color, but he is not as compelling of a singer as the other two. "Memories" is the first song that feels it has a shadow or more sullen emotional depth. It takes another step towards almost 1950s pop when the timber shifts. "Window" strolls along nicely even if it is not the most compelling song on the album, though the distortion pedal being dusted off is a nice touch. Some songs begin to drift and not capture my attention as well as previous ones. Waterfall" is like a dreamy take on the Pixies.

Emly and Balla blend their voices well on "Dream On". I appreciate the mood captured here."Empty in My Mind" marries new wave from the 80s to early 2000s indie rock.  The single note guitar solo makes you feel every not is being earned so shredding is not what is going here. The new wave feel returns on "Stars".  "No Difference ' does not really resonate and feels like typical modern indie rock, but the very fact instruments are being played buts them ahead of their pop peers. I will give this an 8.5, due to the simplistic nature and minimal chops, though the emphasis is on song writing. I know they had a producer who worked with the Rolling Stones , but it must have been after Bill Wyman left the band as the bass is nowhere to be found in the mix and I think with more thump it would have resonated more with me.