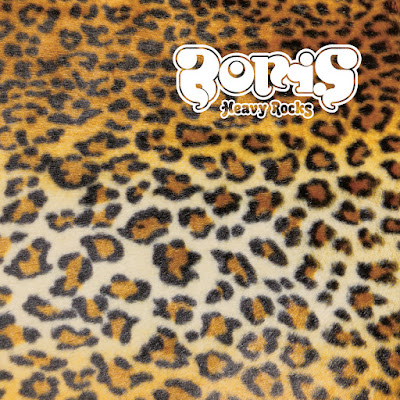 Another chapter in their "heavy rocks" series. It opens with an explosive Stooges like barrages that gets more chaotic as it progresses, while still holding it together like it is a rock song. This band has been around for 30 years so know what they are doing, though they cover a great deal of ground over the course of their career.  "Cramper" in some why has a screamo tinge to the more emotive vocal, but it is one of the oddest production jobs in terms of where the instruments sit. More raw and punk flavored than what the Melvins do, but on the less metal side of where the Melvins sit sonically. Boris has dabbled in metal before, that is just not what is happening here. The focus is on high energy and up-tempo songs. The arrangements are pretty straight forward, bordering on punk more often than not.

I prefer the darker more Nirvana like sound that pumps "Blah Blah Blah" to brooding life. "Question 1" finds the vocals take on a Mastodon like drone, as the restless wave of guitars bucks beneath it. A darker sludge-tinged atmosphere darkens "Nosferatou" which if you are going to have a song about vampires darker is the only direction to go in. I appreciate the mood, but there seems to be little direction aside from droning in terms of songwriting. Not that it should be surprising considering how that has factored in to who these guys are. On "Ruins" they take on a more thrashing aggression as the speed picks up though it is rooted in punk.

They keep their feet on the gas, for the more raging but less fleshed out structure of " Ghostly Imagination" . "Chained" is the first time the weirdness works in the best way possible to create something that is a cross between grind core and shoegaze. Then things get weirder with the piano and electronics of the closing song. The vocals form an abstract droning melody. It is less of a song and more like an atmospheric outro Nine Inch Nails might use. I will give this album a 9, it's a pretty solid entry into their history of heavy rocking. This album is being released on Relapse Records. c