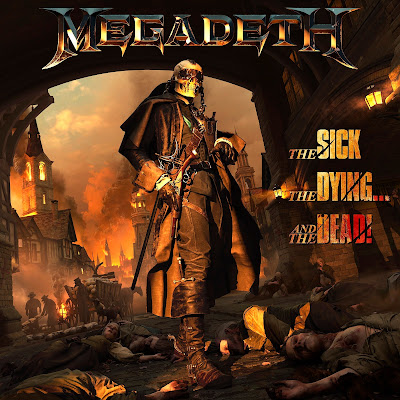 Dave Mustaine is the sole original member of the band after allowing Dave Ellefson to be cancelled.  Ellefson's bass tracks were re-recorded by Testament bassist Steve Di Giorgio. Also, on the band's 16th album Angra Guitarist Pedro and Dirk from Soilwork.  It is still in the thrashing style of the band, though things are so cleanly produced that it takes a great deal of the edge out of their sound. "Night Stalkers" finds the guitars getting more aggressive, but the same cannot be said by Mustaine's vocal, which so far for the first three songs have been largely spoken, the first really stab at singing is on the "Night Stalkers" chorus. Ice-T's cameo is sparse, as it should be.

The first song that feels like they are not just peddling watered down attempts at re-booting "Rust in Peace" is one "Dogs of Chernobyl". It is a more honest and melodic effort. It does build into the palm muted tension of thrash. I cannot believe the producer let the vocal take on "Sacrifice" find its way in this state to the final album. The vocals are awkward, in their phrasing and the terrible lyrics contribute to this. "Junkie" sounds like a cross between a "Countdown to Extinction"   b-side and Def Leppard. An improvement considering the previous song.  "Killing Time" could have been better if the vocals were not given such a dry production. This continues to be a problem with the album as the guitars sound great and the vocals largely ignored in the final mixing.

"Soldier On" just kinda chugged by without leaving much of an impression.  He takes a shot at today's social media influences with "Celebutante", which ends up being a pretty decent song. The guitar harmonies on this album are pretty dialed in. Things get a little darker on the more brooding " Mission to Mars' which is the direction this album needed to head to begin with. This album has been six years in the making, so packed with thirteen there is a larger margin for error when it comes to filler. It seems like the best songs are packed into the second half. The more technical speed metal feel that carries a tighter sound than thrash can be heard on "We'll Be Back" which works pretty well. The band's legacy haunts them in the best way on this song. None of the guitar solos on this album touch Marty Friedman's work, but the solos are plentiful. They also shift through a barrage of really cool riffs on this song.

"Police Truck" has some interesting guitar sounds that break away from what you might expect, though the lyrics are pretty dumb".   "This Planet's on Fire" has Mustaine trying harder to sing since Sammy Hagar is also on this track.  It reminds me early 90s AC/DC.  I will give this album an 8.5 , it has some strong moments, but this band's first four album's really raised the bar high and some of the cheese could have been trimmed the solos more purposeful and the vocals given more love, other than that if you are a Megadeth fan you can round this up to a 9, if Dave can do no wrong, but that might not be the most objective listen,