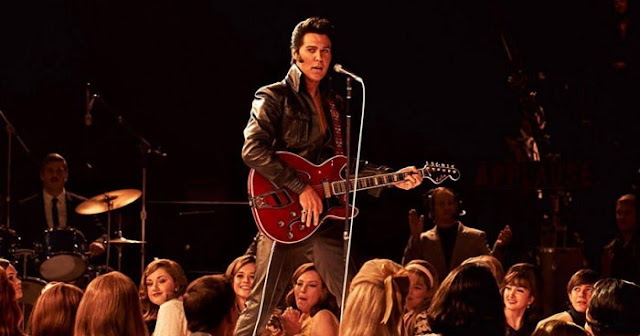 Back when I first saw this trailer for this it seemed odd timing for a new Elvis movie to be released in 2022. Granted he is one of the most influential artists of all time, just ask the Beatles and they will tell you all of them just wanted to be Elvis. However, seeing is believing and Australian director Baz Luhmann whose resume as includes "Romeo + Juliet" and "Moulin Rouge", makes sense, given the visual spectacle of those films. There is a great deal he gets right about Elvis, and it comes from an angle we have not seen before in terms of the narrative.  Tom Hank who plays the Colonel Tom Parker, is a bigger name than Austin Butler. Thus, the movie is told from Parker's perspective. It goes from Elvis as a child to Parker's discovery of him and then well... we know how it is going to end.

It was this digging into the dynamic between Parker and Elvis that I found to be the movie's strength, as well as the moments when Elvis took the reins of his career and turned what would have been a Christmas Special into his black leather suited come back that put the King back on top. Where we see it tailored to 2022, is the slanted narrative that Elvis JUST stole everything from black musicians of the time and sold it to white people, which is only have the equation and why they left out a chunk of his early career. In truth rock n roll was blues, gospel and soul of the time combined with country music. This is how rockabilly came about and the twang that can be heard in his sound comes from. The movie does show how he topped the country charts but paints a deceptive picture of what really happened, even when Elvis is shown as the opening act for country tours and hayrides,

Not 100 percent sold on Butler's performance, but everything else balances him out and compensates for it, which is a great deal for heavy lifting for directing and supporting cast to do, but in the end they made it happen. As a huge Elvis fan... I have an Elvis tattoo, I held this under a microscope, so if you go into the movie knowing nothing about him then it might be an easier time for you to go with the flow. I put it on par with Rocket Man visually, better paced and more rooted in the music, there are moments when they show the ghetto and rap music plays even though it is 1957, because they like to be racist by trying to hard to be inclusive. Those damn Australians. My Favorite Elvis is still Val Kilmer in "True Romance" but this movie is for Elvis fans and just film and music lovers in general.