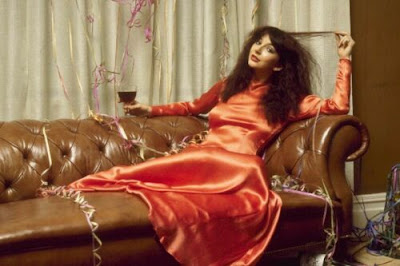 Her last album was the 2011 "50 Words For Snow".  With a body of work that reaches back to 1978, While a British icon, she never broke into mainstream America. Part of the reason for this is her one tour in 1979, found her sticking to Europe. Nor will she ever tour America due to her fear of flying. In some ways this creates more of mystique, In fact I was reluctant to listen to the live album she released six years ago from her Hammersmith shows due to not wanting the mystique shattered by an older Bush. Her recorded output even up until  the 2005 album "Aeriel" marks her as the greatest female vocalist of all time. She is untouched in range and the personas she takes on within her songs.
In the US she has typically received minimal radio play at best. In fact cover versions of her songs by the likes of Maxwell and Placebo might have graced the air waves more. The artists she influenced are no strangers to radio with Tori Amos, Cold Play, Grimes, Regina Spektor and Sinead O' Connor being numbered among them. The few singles that were brought to people's awareness , like her most recent bump in popularity thanks to Netflix, are not the best representation of who she is and what she does. Granted that is a vast expanse of sound to cover. So as a Kate Bush fan of 30 years, I dig into the songs I have give the most rpeat listens to over the years to compile this list of the Top songs of Kate Bush. Granted it was almost to close to call and some songs like "Watching You Without Me" could have made the cut, but I forced myself to knock this out and go with my heart on this.So with that I give you the Top Ten Greatest Kate Bush songs.
10-"And So Is Love"
Eric Clapton added guitar to this track from her 1993 album "the Red Shoes". She has quite a few songs that work off a subdued simmer, this one is the best of those.
9- "Egypt"
This deeper cut from the 1980 album "Never For Ever" is a reminder that she is the queen of prog rock and capable of matching wits with the likes of King Crimson and Genesis in this regard.
8-"Hammer Horror"
The lyrics are about a production of the Hunchback and not Hammer Films. It is one of her most stunning vocal performances that show cases the purity of her early days as a soprano, though flexing her range she adds grits in her chest register.
7-"Deeper Understanding"
Lyrically this song is a prophecy of what we would all become. While the song originally appeared on the 1989 album "the Sensual World", but the best version is her 2011 reworking, which has more interesting vocal production and a mix that better suits the song's narrative.
6 "Strange Phenomena"
We have to have at least one of her songs about aliens on here. This vocally stunning ode wishing into the stars and the high strangeness of the world from d perhaps her the Kick Inside
5 "Don't Push Your Foot on the Heart Break"
The most chillingly dynamic song from her 1978 album "Lionheart" she proves she can rock out when she wants to. Which is a shift as this album is more introspective and piano focused, but she weaves her operatic voice into interesting places here.
4- Night of the Swallow"
There is a darkness to most of her song sometimes more hidden under the bounce of fairy wonderment. Here is it romantically tangible. She takes you on another unexpected journey, with the sonic intensity shifting gears as it builds
3- Hello Earth
From her Hounds of Love album, it is another reflective space song. I would say it's her "Rocket Man: but she already covers that song, but she serves wonderment and steaminess as in one song, along with baroque atmosphere.
2- "Waking the Witch"
The experimental sense of theater she is able to capture is what along with her mind glowing vocal range in the same league as David Bowie, in fact Bowie went to see her back during her 22 night residency at the Hammersmith Apollo in 2014.
1- "Get Out Of My House"
From 'the Dreaming" album comes what is arguably her darkest song as well. If goes in places that no one else does, sonically it is pretty heavy for her, she unleashes very emotional screams and touches on almost every element you might want from her. The guitar in this song is really cool as well, the overall arrangement defies conventional songwriting
.
Posted by Wilcifer at 5:39 PM