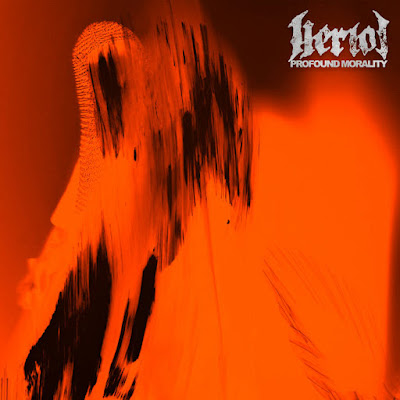 Here is a band that has flown under the radar with minimal hype. The first track is an intro with a dark blend of ambiance and industrial. The second song blasts back in a grind core intensity, but if we are going to be honest most grind core bands are either heavy punk bands or quick death metal songs. The break things out with ghostly passages where female vocals are creeping around. Then it goes into straight up death metal blasting before becoming more spastic. A darker more death metal version of Code Orange could also be a fair assessment. While I like the first actual song the more single-minded blasting of "Carmine" is more noise and less impressive.

Just hanging on the bass line does not make it industrial. The abrasiveness of what they do is more worthwhile when the switch it up like that though. There is a more industrial feel to "Mutagen" which hits that dark melodic feel I like, it however does not feel like it is a fully fleshed out idea. I am sure they are into Godflesh, but they do not sound like Godflesh and really it was when I saw they were from England that the Godflesh connection kicked in. Though speaking of British bands they are most likely more into Napalm Death.  The more straight forward death metal attack of "Enter the Flesh' sounds like a post-apocalyptic Entombed.

"Abattoir" is more noise based in its drone and feels more like an interlude than an actual song, as it never develops into anything. The last actual song is more focused. The vocals kind of go off into a Diamanda Galas direction before the growling comes in. This band has a lot of potential I think using some restraint and allowing the songs to mature is what is needed to really tap into that.  Experimentation sometimes gets the best of them when the answer might be just to go with the song rather than the sound. But even then it is interesting enough for me to give this an 8.If you are into noise ridden industrial death metal then this is your jam.