Death Bells: "Between Here and Everywhere" 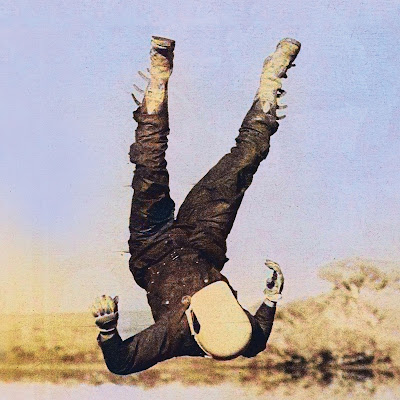 It makes sense that the band's move to Los Angeles finds their sound becoming more streamlined and palatable to the masses. The punk in the post-punk side of the equation is dialed back to the point of putting them in the same sonic zip code as the more mainstream post-punk revivalists of the early 2000s like Interpol and the Rapture, who were slightly to the left of their big arena ready counterparts the Killers. Here the more accessible leanings work in the bands favor as they have stepped up their songwriting game, resulting in some of their most memorable songs yet, On the lead single these results in sounds providing a counterpoint again one another as the upbeat vibe of the song proves a backdrop for dead pan vocals and glum lyrics.
The first hint of downtrodden mood haunting the underbelly of a song is on "Lifespring". There is the obligatory nod to the 80s in many of the sounds assembled, without trying to pay tribute to any one band, Sure if you listen close enough you can hear traces of Inxs, U2 and the Cure, but it is DNA of their own identity.  "Intruder" works off of a stark drone, with the chanted vocals providing a grim narrative. It is the first song where their drummer really stands out, which in a genre known for drummers just trying to keep time like a drum machine this is noteworthy. It should also come as little surprise how that I am a huge fan of how things get darker on "A Better Resolution". The guitar carries more of a western twang.
There is a breezier indie rock shuffle to "Last Days" which carries a more subtle atmosphere amid the more casual rock stylings. It comes closer to the Smiths than any other song thus far. The relaxed croon of the vocals over the jangle of guitar.  "Space Without a Name" is in a similar sonic space as the previous song though more intentional in it's groove and how the drums move the song forward. Where most post-punk leans into minimalism and reverb, these guys have a warm and organic sound here.  The chorus to "Eternity Street" builds nicely, but the bulk of the songs works off a lingering minimalism at cruise control. The last song is almost more of a psychedelic ballad that swells when they are joined by Argentinian Soprano Laura Delogu. Though it is going to be one of the album's songs that have to grow on me. I think they went above and beyond this time around , so I will give this album a 9.5.
Posted by Wilcifer at 12:46 PM