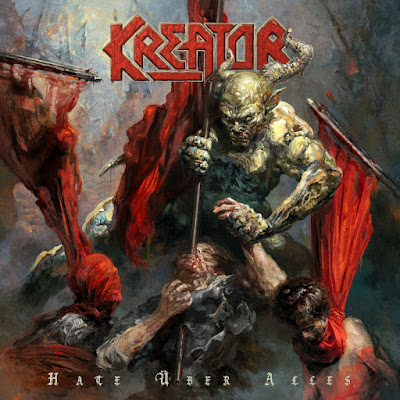 These guys were one of the first thrash bands to churn out a more extreme sound that opened the door for death metal. Age has made them a little more melodic. I think it softened them as people as lead singer Mille has stated in recent months he is not an actual fan of extreme aggression or finding pleasure to kill, so he was just joking back in the 80s.  He continues to put on a similar show with such themes on the new album. The vocals are more shouted than snarled here. "Killer of Jesus" finds them keeping the speed poured on and working off the same blueprint as the previous song.  This shift in the vocal style has not yet grown on me though the last album I was really into by these guys was "Coma of Souls".

"Crush the Tyrants" has a more deliberate gallop that reminds me of a beefier version of "Holy Diver". The drummer is the only other original member joining Mille. Finnish guitarist Sami of Barren Earth has been along for the ride since 2001 making him a solid part of the band by now. Making Fredric from Dragonforce, the newest member having joined on bass in 2019. There is a more classic metal gallop on "Strongest of the Strong". It almost has an Iron Maiden feel in how the guitar harmonies work. "Become Immortal" find the vocals gaining more snarl. The lyrics are more reflective about the journey of the band. The drumming continues to have echoes of Iron Maiden. There is a little cheese to this one but that is largely forgivable.

For a band against war what are they doing with "Conquer and Destroy". They could make the guitar harmonies come closer to death metal than power metal on this one, but I will write it off as just being European. There are a couple of head banging riffs but the rule here is "cool riffs alone does not a good song make". They put more into the song "Midnight Son' and bring in female vocals . It is so melodic it does not sound like the same band. There is a catchy refrain to "Demonic Future". Once again not tapping into the same aggression as their earlier more classic work, but solid for what it is. I normally like actual singing but I am not sure about when these guys do it though I cannot fault them for trying. Things are more deliberate on "Dying Planet" which is a good song but is it a good Kreator song?  Overall I will give this an 8.5, which is more polished and better songs than most bands out there are making, but these guys are one of the forefathers of extreme metal so it is far from their best work.