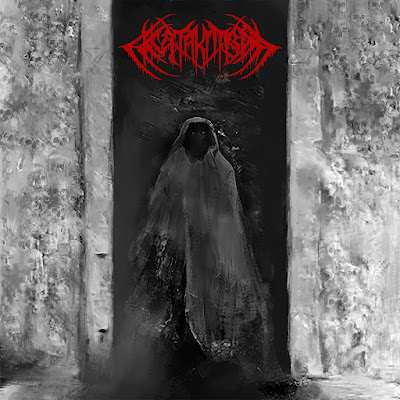 The first song by this Swedish band, is run of the mill death metal and kind of blasted by me without leaving a last impression in mind. In fact, the first time I listened to this album the first few songs all did that. It was not until my second spin that the more deliberate crunch of the songs struck a chord with their dense heaviness of the first three the second song is the best. The third has more guitar solos and is faster so maybe if that is your thing you will dig, it but it felt like most of the other death metal I have heard this year. "Sacrifice" does find its groove, but the rule around here is cool riffs alone does not a good song make. With death metal the question is how much blood you can milk from said riff and how many different shades of blood. Some of the steady intention they put behind what they do has echoes of hard core to it. The guitar solos dispel that, however.
"Worship Death" is a great sentiment. It is darker and finds the band digging into a more Entombed.  Even the vocals take on more of a throaty bellow than growl. Doomy rock hint chord progressions creep in, but this plays to the songs favor as it needs more color.  The they hit you with a more Slayer like barrage going into "Embalmed in Concrete "the chug it locks into is pretty powerful, but it is wasted on them going into a more frantic pace. I think some who just want brutality and heaviness from their death metal will be more impressed by this song than I am. It is also another step further in the Entombed direction, but some Slayer hooks in the thrashing riffs.
"Death Opus "might have the Entombed thing going on as well, but when you bring the riffs that command a more serious level of headbanging more is forgiven. The squealing guitar solos do not add a great deal to the song, but the riff is so fucking mean it commands respect. "Left For the Vultures to Feed" proves that even for these guys heavy alone is not going to save them from the mire of death metal so many bands like this get lost in. With that said this is still and impressive release that continues to grow on me, and if you are into bands wanting to go down the Entombed path then this album is for you I will give it an 8.5. Being released by Redefining Darness on July 29th.
Posted by Wilcifer at 5:25 PM