Death is June - ZOUS:"No Ground to Give" 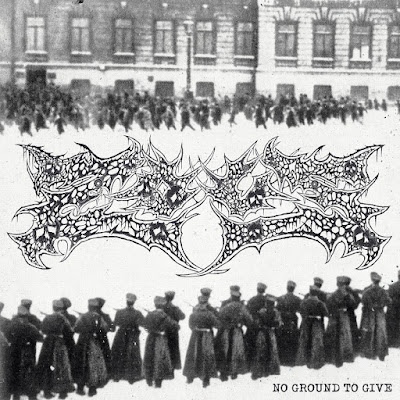 Nails drummer Taylor Young has released what is a solo album under the moniker ZOUS.  He has written, preformed, produced and engineered this entire album. Well, he does enlist his buddies to come in a help out when it is time for the obligatory guitar solo. This project like to think of itself as old school death metal, and while it is not djent or wanting to be In Flames or anything blackened, it grinds and crunches with more of a modern hard core feel than anything in the zip code of Morbid Angel. Which makes sense when you consider his day job. It is very heavy and crushingly intense.  So much so I had to listen to it a few times to see if I had perhaps just gotten knocked out by the heaviness, so I did not take note of things like the song writing.

"Pray a Lie" is even more aggressive than the opening track. The vocals are at a low gurgle. They are perhaps the most old school thing about their overall sound. Though on this song you can hear how it might be more easily traced back to Tampa death metal in the late 8os, than the first song which was more like Nails. "Stepped On" is even more informed because the verse riffs groove a little more and is a reminder that death metal came out of thrash.  Brad Boatright of From Ashes Rise fame, contributes more shouted vocals that yell out from the back ground in a more Tom Araya manner.. This is the also the first song that shows them lay on the speed for a little while.

Leon Del Muerte of Murder Construct lends a guitar solo to "Authoriticon". It reminds me of "Formulas Fatal to the Flesh" era Morbid Angel, in the way it grinds like a mammoth tanklike machine of death. Things are more deliberate on " Event Horizon" which has some of the most relentless riffs ever to crush your skull.  Chris Reifert lends vocals to the songs which amount to some ranting in a middle section, but I am all for more vocals colors here. The main vocals sounds like it is gurgled a little lower on this one. I will round this guy up to a 9.5 , as it is just the kind of heavy I want.