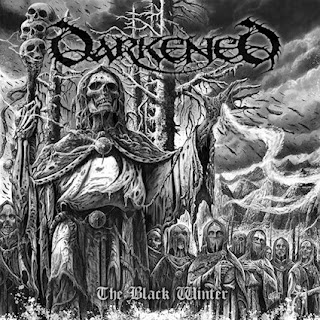 Here we have the ex - drummer of Bolt Thrower and the bassist of Grave. They pull musicians from the UK, Canada and Sweden. This takes the best sounds from all three areas and melds them into something that is dark and aggressive while the guitars do not shy from melodies, while not getting too caught up in harmonies that it feels more like power metal. They dig into a deeper grittier groove on "Flayed" . It works here, but if they go to the well too many times with this sort of thing I think the uniformity of sound would reduce them to sounding like a just another death metal band. The song writing on "Terminal Lucidity" finds the band just kind of  chugging into the motions expected of death metal and defaulting to speed while all else fails.

This might seem like a harsh or overly critical assessment of the song, but let's consider these are seasoned pros , who should be capable of more, not just putting out songs to fill an obligatory album to tour behind. With that said they are very polished and this is a really well produced album, so if all you want out of death metal is a certain sound well they have the sound,. But music is about songs. Songs are what make an album, a classic that you want to listen to year after year. There is more of a hooky groove to inspire head banging on  the title track. They are not trying to break new ground as a death metal band. What then is important here is how they carry the torch while still writing interesting songs. However the formula for these guys is not hard for them to tap into as they know how to write aggressive melodic guitar driven hangers as heard on "Fearful Quandry" .

What they have to avoid is the compulsive temptation most death metal bands fall into which is playing fast for the sake of playing fast. Deicide is one of my favorite death metal and they play fast, but they do so in a way that every piece of their sonic juggernaut fits perfect in the song. Here there is less fate and more melody so they have to walk a more delicate balance. There is a more solid groove to "Plague of Despair". The vocals might not be as growled as some, but you can understand the lyrics.  There is also a great deal of thrashing chugs going around. The story the lyrics tell in the last song is pretty upfront. The album grows on me more each time I listen to it so I am going to give it a 9.