Death is June - Come to Grief : "When the World Dies" 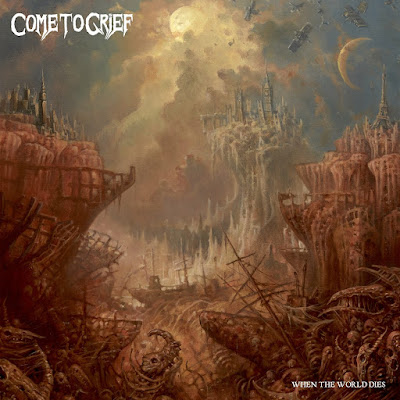 Despite being around since 2014 this is the band's first full length album. They have released a few splits and eps prior to this.  However, it is the fact they used to be the band Grief that really built their fan base  who has been anticipating this release. The first song is an example where labels a band sits upon might be more for a persona, they have created than what they actually sound like. That is if the first actual song is any indication, then these guys are a death metal band more than sludge or doom. Are there some death doom moments, sure the third track   "Scum Like You" has a doomier tinge to the riff, but the emotional currency these guys deal in is anger. When the vocals snarl in at the two-minute mark it is clear they are angry. Sure, there are hints of the kind of punkish dirt that stains genres like sludge and crust, which are really just off shoots of death metal being played by former squatting punks from the rail roads

There is a pretty powerful stomp leading into "Devastation of Souls" before the turn it around with a very Sabbath influenced riff with more swing to it than you might expect from these guys. "When the World Dies" has a more harrowing feel to the guitars, as the vocals carry more spiteful anguish.  In terms or dynamics and arrangement, it seems like the punishment of heaviness is all they are bestowing upon your ears here. It is on "Bludgeon the Soul / Returning to the Void" that the creative momentum seems to come to a slower grind. This song felt more like a transition from the previous song rather than a clear change into a new song. Granted the vocals take more of a pounding roar as the lock in with the drums in a battering manner than recalls hard core a little more. But at the two-and-a-half-minute mark it seems like we have heard the full extent of where this is going, and it does not sound a great deal different than the previous song.

"Death Can't Come Soon Enough" is a more deliberate pounding. While I would not put it on the scale of catchy in terms of conventional songwriting it does sound like aside from the screams of the vocals, they were more conscious of where they wanted to go, and the vocals are just falling on the place that makes the most sense. They almost hit a groove, but they think about evolving the verse riff so that is cool. The only drawback is the song works off the same pounding for the duration sometimes that pounded is just grooved more than others, I will give this album an 8.5, I am not sure if lives up to the anticipation unless at this point you just take whatever you are given, but I do appreciate what is going down here. Listened to it a few times and not opposed to listening to it a few more, however not in a rush to get it on my iPod.