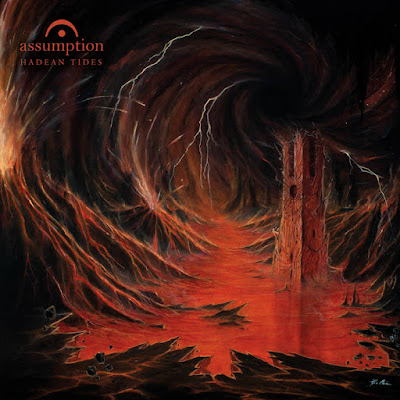 This band formed back in 2011. Not the first death metal I have heard from Italy, however they might be the heaviest. The opening track finds them crushing it is every way. There is a cavernous and dense sound, which is a winning formula for this sort of thing as it feels organic. Before I put this album on, I was reviewing the new one by their labelmates Void Witch and it is clear they should have taken notes from these guys when it comes to recording death metal, not only does this sound great , but they are not trying to murder your ears with the same bag of hammers twice. "Submerged by Hadean Tides" opens with a clean creepy guitar and when it grinds to life there is a more deliberate feel though the distortion is still oppressive. The varied sounds give the song the dynamics needed to elevate it over the opener. The main concern with extreme metal bands is the opening track is normally so heavy you forget to listen for the finger points of song writing till the second song. I never had to ask if they could write a song with this one.

"Daughters of the Lotus" digs down into the despairing grime of death doom. The tempo is little more than a faint pulse. The low gurgle of the vocals what is keeping the song going in the early stages,. The fourth tracks is just an interlude of ambient noise. This leaves "Liquescent Hours" to pick up the pieces and return the album's momentum. It hammers down with a heavier stomp for sure. On the second song they really set the bar for themselves, and while this one plays it safer and seek more the traditional death metal brutality just in a more slower syncopated manner most of the time, it takes less risks . We get four minutes into "Triptych" before it shifts from a minimalist spoken word piece into metal than erupts. In some ways it reminds me of Neurosis in this regard.

They kind of pick up where they left off on the previous song rather than spoken word it's throat singing, and there is more of a death gaze feel in how this song floats along. I think when this album is not floating away on atmosphere it is doing best and at best it's pretty fucking good as they hit that sweet spot where they have masted a very effective heavy sound but do not sound like they are paying tribute to any one band. That might seem likea low bar for success when it comes to death metal but I have been listening to it all month and can tell you bands like this are an exception to the rule. I will give this album a 9.