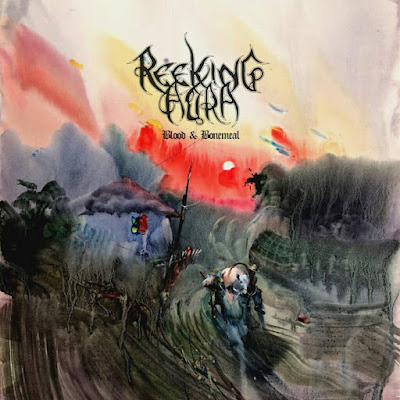 This band is comprised of long-time vets of the New York death metal scene, from bands like Artificial Brain and Buckshot Facelift. Normally I prefer the more deliberate pacing when it comes to metal rather than being lost in a blur of distortion, but the pace of the opening track works better than where they go on the second song. However, it seems as if they are trying to find the middle ground as they take things to more of an extreme speed wise on "See the Size of a Spider's Eye" as it seems a little rushed in its fury.

There is never a hard and fast rule of what is going to work with these guys as when they lay back and lets thing groove more with "Harvesting the Hatchet" it works just fine. I do not think they have bad sound; they just need to rein it in to what is the most effective. It is weird how they are being marketed as more of a death doom band when gore grind and grind core are elements that I hear more of from them. The vocals are a low Cannibal Corpse gurgle that makes the lyrics impossible to make out. This approach also causes a more uniform sound across the board.  There is a cool riff they wind up on with "A Vegetative Mush..." but the rule around here is cool riffs alone does not a good song make.

"Pyramid Shaped Plow" typically goes for brutality more often than not. but finds them in some grimy groove here and there balancing out the sonic range of the song. The second part of the song which must be "the Caretaker" half works off clean guitars. A guitar solo is pretty much the center piece, and it might have been more interesting if this was what they broke into at the middle of the song rather than just being tagged on at the end. They are cool sounds to create, but how much good is it if it is an idea, you cannot organically work into the song? The last song "Grublust" finds the passing between the two dynamics, fast and slower grind. It is ok, but nothing new. I will give this album an 8, as they are doing it well for what they are going for. Sure, some fine tuning in the song writing department, but if you want just heavy fucking death metal that is brutal, this is done with more interesting dynamics in place than what most bands do these days.   It drops July 28th on Profound Lore.