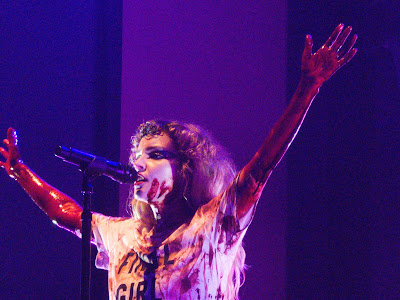 When a friend who was bartending at the venue asked me what Chrvches are like I described them as being a cross between Taylor Swift and the Cure. They did not prove me wrong. The venue which an outdoor stage wedged into the large courtyard of downtown St Pete apartments, has a 2000-person capacity. Chrvches came within 200 people of selling it out. 1800 people fit pretty comfortably in it. What it was not ideal for was rain. It started pouring a few songs into the opener  fanclubwallet, who is a female fronted indie rock band that on their album has more of a folk feel to it, but on stage carries more of an androgynous 90s alt swagger. Between the openers set and when Chvrches took the stage an entire storm washed over the crowd, but half the Floridians seemed to be into it, the other half not so much. I was somewhat on the dry side as I made it to the barrier. Chvrches took the stage at 940. Online I have read that this delay was due to the rain. This is not true the doors were slated for 7 and those were delayed before rain ever headed that way. However, all surrounding situations were forgotten once Chvrches took the stage, even the rain.  They opened with "He Said She Said" from their new album. 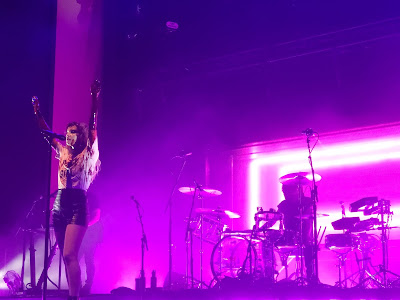 Their newest album also lent itself to a more rock show interpretation. They two keyboardists, switched off playing guitar and bass. This created a more intense sonic feel as the entire performance was more in your face than you would expect from a pop show. I think live they would defy the label pop and almost have more in common with a post-punk band that leans in a new wave direction. Mayberry shows she is more capable than the albums suggest, hitting higher notes and adding to the melodies with embellishments, they even jammed out the ending of some songs, which was another unexpected moment that exceeded the expectations

Her quaint humble demeanor that was not selling sex as most pop singers, but very down to earth with her in-between song banter though she threw her body into the performance with a natural theatrical flair sometimes accenting certain lyrical phrases with a gesture, that was not over doing it and not choreographed. It was more about natural response to music rather than dancing. This is the line that separates pop singers out as entertainers rather than musicians. UIs their more focus placed on dancing than music?  Michael Jackson pretty much laid that blueprint out.  If you asked was this more like watching Siouxsie and Banshees or Michael Jackson, the answer would not be Jackson. There was an intensity rather than a tension, never really a dark moment even when she came back on stage drenched in blood, but there was a great deal of intention. I cannot stress enough how impressed I was with their performance, the crowd was captivated and so into it even in the rain. They are one of the best live shows going from a newer band these days for sure.