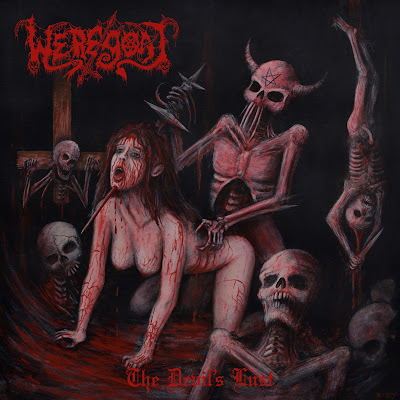 This album almost sounds like Deicide's Amon demos. There is that kind of raw ferocity to it. Not what I expected out of Portland. This is being labelled as bestial death metal, but there is still a great deal of song to this. If I was 15 I would have freaked the fuck out over this as I was into this sort of thing for sure, though I would have hoped they were serious Satanists which I doubt with the kind of over the top almost ironic imagery. It is one thing to have raw production, but it is another when things like vocals are getting lost in the mix, which is what happens by the second song. Maybe if they had gone for the Combat records mix rather than the Tampa basement tapes that would have worked better.

Once I got to the third song "Festering Wound of Uncreation" things got blurry. The speed is broken up by an impressive thrashing chug, but the problem is cool riffs alone does not a good song make. They do employ some atmosphere that goes with the horror Satan narrative. It took three listens to the title track before it began to connect. It is not until a sample where some woman says that she kisses the evil's cock that the song actually kicks in and then it is pretty rough. The bass sounds like a fart and the drums are on the thin side.

Even with the sampled interludes leading into the songs it is hard to tell where one begins and the other ends, due to the many uniform sounds they craft their songs  with. By the time we get to " Goar Perversion" it does not matter how much monkey fucking is playing in the back ground things sound the same. The more deliberate "Burn Deep the Signs of Hell" , It reminds me a little of " Captain Howdy " in it's groove. I will give this one an 8 due to the shitty production that sometimes impairs the songs, but I like what these guys are going for and it is a fun listen. this album does not come out until August 12th and drops on Iron Bonehead.