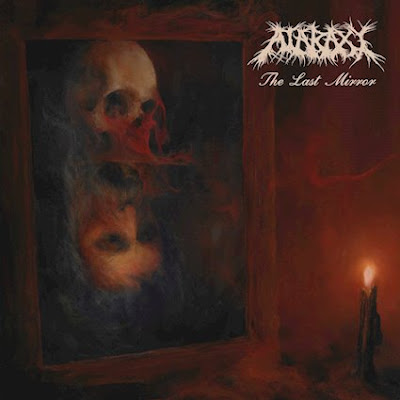 This Spanish band plays a grimly harrowing version of death doom that sometimes feels more like Obituary. The first track in more of an intro than a song unto itself and feels like it should have just been written for the intro to "the Bell That Constantly sounds". Three and a half minutes in the eerie atmosphere leans them more in the doom direction until they pick up the pace with a heavier more blasting riff. Thios sounds cool, but where it goes and how it gets there is a murkier story. By the end of the song, it lingers in its languid lumber. "Decline" is more of a pummeling death metal speed. The growled vocals feel more like old Sepultura. There are some cool moments of reflection when the chord are allowed to ring out, but overall the song is very typical death metal.

"Visions of Abscene' stars off with depressive guitar line that builds into the kind of doomy lament that colors a great deal of this album. This song has a dark throb, but it is easy to get lost in it as the composition itself drifts with little more than double bass with which to hook you in on a casual listen. There are faint melodies with the chord progressions though they tend to color things with very similar crayons. There are some chug that grab your attention more than others. In hind sight it is more interesting than the more typical death metal churned out on "Under the Cypress Shadow" The cadence of the vocals is very uniform.  There is more of a journey as the song progresses , but how it hooks you in is with the eeriness of its atmosphere more than the power of its riffs.

These elements come together more effectively with a driving power behind them on "Silence" . The working pieces lock in better. They also manage to summon up a higher level of  song writing for the last song. Keeping things more deliberately paced certainly helps with this. A common problem for death metal bands is pouring on the speed for the sake of doing so ,  it loses all dynamic power. The fact they are using restraint , plays to their favor.  I will give this album an 8.5, very impressive in terms of the mood and darkness created.