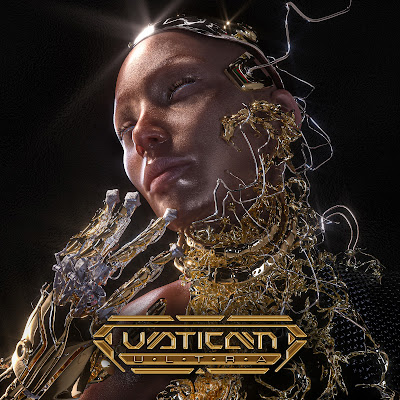 Not the sounds you expect from Savannah, Georgia. This is a hard-core band, metallic enough to be metal core, but not big on the break downs. Not to say there are none, they are just not the bread and butter. There is more groove on the second song. Not enough to put it in league with the bands that owe more to Pantera, but more than tough guy hard core typically has. This groove is a key selling point as it makes songs like "Reverence" have more relevance. There are also clean vocals which in this day and age, I should have expected amid the twists and turns of the song so far. "Where Heavens Collide" is a stab mainstream metal and sheds all hard-core aspirations having more in common with the Deftones. Well done just the least original moment so far.
By the time we get to "ultragold" things are blending together in a blur of hyper aggressive chugging that begins to wear its own uniform. There is also a great bass tone driving this song, and the album is really well produced for sure. Even at its most neanderthal you are still bobbing your head. They do delve into a fair amount of organized chaos on "Decemeta". They are effective at doing this. "Uncreated Waste" creates the illusion of reckless abandon but sounds pretty close to a hundred bands I have already heard; however, they do this sound well.  "Damage" is a similar display of vulgar anger with the metal emphasized over the core.  The higher vocals being more spastic than the lower hard-core bark. A pretty common trick at this juncture in time.
Clean vocals lead off the more accessible emo stylings of "By You Love" which finds the days of Myspace coming full circle/. "Mircale of the Moon" is angrier than the previous song for certain, though not a great deal heavier than the other times they have indulged themselves in this sort of thing. There is a cool riff to "Mirror Dream" but the rule here is cool riffs alone does not a good song make. The other pounding and screaming sounds like the rest of the pounding and screaming we have heard so nothing new is brought to the table.  "Numb" brings some new sounds to the table , female vocals and a ripping proggy guitar solo. Female vocals lead off the last song. Until the heavy build at the end it's atmospheric pop. I will give this album an 8.5, it's impressive even if at times conforming to the safe space of the modern metal core genre.
Posted by Wilcifer at 4:52 AM