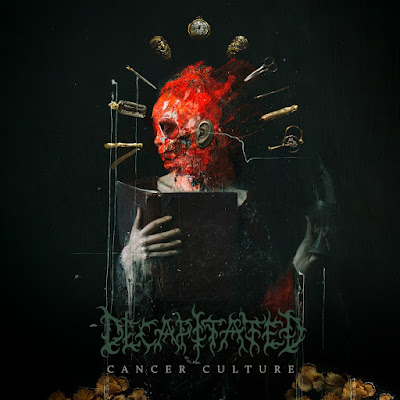 The Polish band's 8th album finds them blending enough groove to balance out the more technical elements of what they do. This is the top contender for best album title of the year. Not the most brutal when it comes to death metal, there is a fair amount of melody buried in the guitar with the drumming the most technical aspect of their sound. Considering the dude has been playing since he was 12 that makes sense. The vocals on a harshness scale falls somewhere near Sepultura. They are coarsely shouted more than growled in a guttural fashion.  The second actual song "Just a Cigarette" is not a huge dynamic shift from the title track. If you need guitar solos, then these guys have you covered on that end.

"No Cure" is faster and less refined in the song writing. It is not until it breaks down into a more melodic passage halfway into the song that it sets itself apart in terms of song writing. These guys play about as fast as the songs can handle and remain manageable if they pushed it further than the momentum would feel like they are tripping over themselves. The female vocals that show up on "Hello Death" , certainly add another color to their sonic scope. it is a hookier sound that would appeal to fans of mainstream metal that are on the fence when it comes to death metal. "Iconoclast" is the most straight forward song so far. Clean vocals show and add more color though nothing ground breaking.

Fans of Meshuggah and Gojira will be able to find a great deal of common ground here. "Suicidal Space Programme". shows how the band is more death metal than Meshuggah and certainly heavier than Gojira. The dive-bombing guitar solo is a nice break from shredding. I am not sure what the point of the one and a half minute "Locked" is it is not like they are a grind core band. This is a very cleanly produced album with a big guitar sound that excels at capturing the metal tone.  "Hours as Battlegrounds" is very deliberate and stompy. It has more of a classic Morbid Angel feel. This more deliberate pace lends itself to being darker, which almost could also be said of the last song. What keeps this from happening is how they hurtle into a higher speed attack. This finds them conforming more to what is expected from a death metal band in 2022. I will give this one a 9 as it is an excellent album, I think they play it a little safe which is why I am not giving this a 10, since it feels like they are not breaking new ground but working well within the confines of who they are.