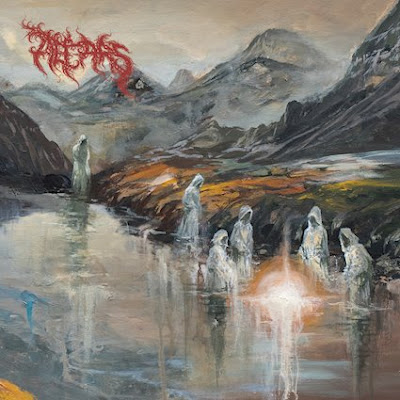 This Australian band is back from a hiatus due to an illness befalling founding member Cale Schimdt, the band is pressing on with Brendan Sloan of Convulsing replacing Schmidt on bass and vocals. They quickly prove themselves still capable of conjuring cool sounds. They are also capable of grooves. However, their fetish for Avant Garde songwriting tactics aborts these elements on the first track. The most memorable moment to many fans will be the brief vocal contributed by former vocalist Schimdt/. The song itself is not allowed to resolve until the tense and angular "Perverse Entity". They have all the moving parts that you might want from death metal. Their guitar tone is sharp and nasty. The vocals are low and guttural in their growling. The drumming is intense and nuanced.

I even appreciate the fact the woozy turns the song take off set the normal aggression of death metal that would under other circumstances have this steam rolling over you by now. Here things are giving space. Perhaps an unsettling amount of it when it comes to the turnaround of riffs in the map of their songs. The typical all blast head hyper aggression of death metal does not come lashing at you until "Luminous Jar". Then it is paused for you to reflect on the atmospheric dissonance they leave hanging over your head. This gives way to chaos and the song writing suffers.  "Black Light is Upon Us" finds things given more space and a darker mood, but in terms of songwriting tends to drone. The title track that follows is possessed by a more typical death metal onslaught, though some odd, timed punches give it character. The drummer should be given more props here as I am not sure what time signature, he is supposed to be keeping count of, but he holds it all together. It becomes more sonically abrasive, but in the best way for them to be.

"Anhedonia "finds the drums riding in on a flood of double bass.  His use of double bass is not overdone like most death metal bands. There is a battering syncopation that works really well to capture your ears. Is the barrage of sound a little much at times? Yes, but that is the point. "Opening the Passage" waltzes around and ebb and flow of noisy dark churning. Not the most head banging form of death metal but will interest those looking for something different. The last song was more noise, funny enough, I left it playing and the next thing I knew I was on song two again, never noticed the entire album started over so far, the zaniness and rejecting song structure these guys have a formula sound that becomes rather uniform once you get lulled into it making it more about sound than songs. For this reason, I will round it down to an 8. Their unique qualities in terms how they approach death metal go them scoring higher than most. Drops July 8th on Everlasting Spew.