Death is June - Egregore : "the Word of His Law" 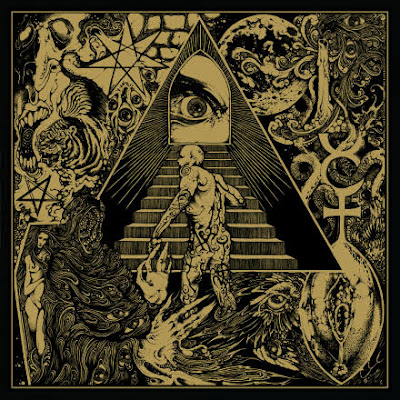 This album opens in a manner that impresses me with the ability to capture a sound from an era and make it their own. Granted the era here is 80s death metal.  They pray the most fervently at the altars of madness, which is not uncommon for this sort of thing, but go off into these more technical flourishes. They feel like they do not live and die by a sound but want to take into other places. Sometimes this enthusiasm might get a little carried away as the second song finds them pouring on the speed in a way that hits you with everything so fast there is not time to savor any of it. This is just on of the pitfalls of the genre. The second song does have a cool Slayer like riffs that rips out of the murk, but the rule around here is cool riffs alone does not a good song make.

The title track is more deliberate and slows down just enough for you to soak in the guitar riffs. The vocals are a mid-range rasp that capture a blasphemous anger not unlike the early days of David Vincent or in some passages Nocturnus. There is a feral energy that comes at you with raw abandon but is balanced out by atmosphere, so works for me where it might not in another context. Another factor that plays into their favor is their penchant for using razor sharp thrashing riffs . This is a forgotten art of early death metal for it came from the earliest days of thrash before bands wanted to be as big as Metallica. They are also really good at using creepy atmosphere which contrasts the more straight forward in your face moments of this album. The way singing is introduced as almost a distant monk's chant also adds a color to set themselves apart from their influences.

With the last song "An Address to Abraxas" the delve even deeper into the dark of atmosphere and set themselves apart from their influences.  Clean melodic guitar tones abound here and it makes me wish they have blended this kind of thing in with their heavier stuff as it would have really set them apart. The song breaks into a Death in June like strum with whispered vocals serving as the spectral narration. The end just kind of drones out, but while they locked into the more surreal side it worked well. I will give this album a 9 it is pretty solid and their use of a wider range of sonics is impressive for death metal. Out on 20 Buck Spin.