Black Country , New Road : "Ants From Up There " 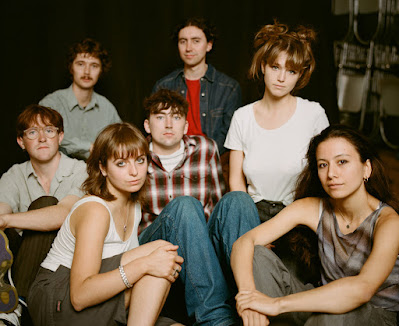 This came out back in February and I am not sure why I have not checked it out now until four months later. Typically, why this happens is the album is not easily down loadable in my first searches for it or the label doesn't reach other.  The previous album was one of the best post-punk albums of the year. Where their last album road the line between the early days of post-punk and a jammy weirdness, this album leans in a more prog direction with the dead pan vocals the only thing that holds traces of the starker postpunk tension. It is hard to fault them for this when the end result is a great deal of fun almost like Gogol Bordello without their obnoxious singer. Things break into an easier going mood with the more languid "Concorde" when the vocals take on a more wavering croon that is delicate in a manner not unlike Bright Eyes, who also serves as a fair sonic point of reference. This album sits more solidly as being indie rock, but I am also only three tracks into it so it could get darker.

Another band that comes to mind when I hear "Bread Song" is Arcade Fire. If you miss when that band did things in a more organic fashion, then this album might appeal to you. It is a slow build that lingers on the folk ballad feel resisting the buildup. "Good Will Hunting" has more movement and works better as a song thought there are passages where they simmer n ambiance. I think on the last album their sometimes-angular nature when set again the quirky narrative of the vocals reminded me of King Missile which is also a comparison that can be made here. "Haldren" does some interesting things sonically. The subtle pound to your ears almost breezes past you.

The next ballad that emerges to offer a dynamic shift will slowing the album's momentum is 'the Place Where He Inserted the Blade", things pick up into a skip through the park two and a half minutes into the song.  This type of sweeping emotion showing improvement with his singing but is also a noted stylistic change from the first album that might take some getting used to. They take a turn back more toward a sprawling progginess on the last two songs though "Snow Globes" works more of a post-rock drone for the bulk of the song even after the vocals comes in. I like the lyrics to this one. The drone continues from another angle on the closing song "Basketball Shoes" which is over twelve minutes. At the midway point they wander their way into a sonically more intense build. I will round this one up to a 9.5 due to the fact that some of this is just going to take time to grow on me as they shift in direction might not be drastic but it does take some time to digest this fully and let it sink in.