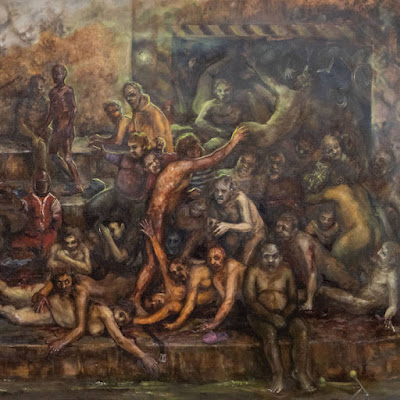 When it comes to extreme music most of it came from some early crossroads where death metal met hard core. The bands Relapse Records debut finds the noise ridden grind core being refined into a dense and perhaps even more punishing monster while fully aware that they have a job to write songs. The vocals are the most hard-core thing about this band. They are less spastic than Napalm Death. When they lock into a grinding chug the results are very powerful. They more explosive bursts of anger erupt on the minute and a half "Mutilation" which has a crusty layer of crunch over it. In the 80s this sort of thing was thought of as cross over. Now kids will label it a hundred different forms of "core". The churning fury of the title track has more in common with death metal in the hyper aggression of it.
The overall formula to these songs is they are bursts of feral aggression that are under the three-minute mark more often than not. Price of "Utopia" serves this up in more of a raw punk manner. The riffing cruder. Though the vocals feel more like early thrash. "Transcend to Wet" is a glitched out apocalyptic for of industrial snarling.  The rough around the edge's abrasion creates something more sadistic than what most bands have been dishing out these days. There is more metal to the guitars of "Hysteric Bliss". The race at a blistering pace and cram a great deal of riffage into just under three minutes. A guitar solo actually shows up. "World of Shit" is another out the gate in your face explosion that is somewhat monochromatic in it's dynamics/. " Fantasy/ Greed' finds them crushing down with a more metal intention.  These are the moments  I feel are the strongest.
I am also in favor of the all out industrial that possesses "Kinethesia". The last song "Perverse" is ten minutes of noise that sound like Negativeland being eaten by a robot dinosaur. Not an actual song, but I acknowledge those sounds exist and it is what it is. I will round this down to a 9 despite enjoying it a great deal as it could have been a little more song focused but I still appreciate what they were doing here.. It is fucking intense for sure.
Posted by Wilcifer at 2:44 PM