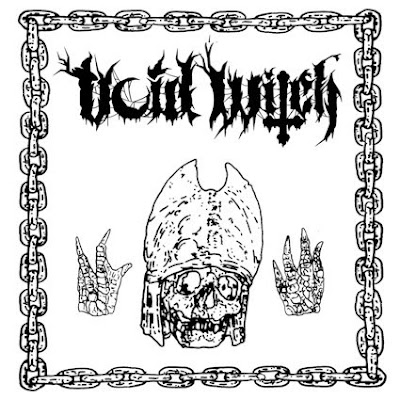 It is important to hear what doesn't work as much as it is to hear what does. What does not work I just give one listen to and power through it. What does work I listen to repeatedly. This brings us to this Austin based band. Most of their problem lies in the mix. If the vocals sat back against the guitars rather than being so up front. The vocals themselves are the kind of gurgling low growl that sounds like it belongs on a gore grind album. Then there are all the varied metal elements like the Swedish thrash riff that just sound like the songwriting consisted of throwing riffs at a wall and seeing what would stick. I think if it had been allowed to have rougher dirty production sound this might have been more convincing. It also might sound like Entombed if it was produced in that manner so a damned if they did sort of thing,
This month I have already reviewed over 20- death metal album that have many of these qualities, but things worked better for a variety of reasons. The second song reminds me of many of them. The song writer is darker and denser, more aggressive. Metal is like funk; you cannot fake it. I am hearing many of the required death metal sounds. I am however not feeling them. In the first Avenger's movie when Bruce Banner was his secret to being able to change into the Hulk at will, he said the secret was he stayed angry. I think the same applies to death metal. You must not be just a nice guy; you need to harbor some kind of disdain for the world as a whole or organized religion or anything just as long as you can tap into that hatred and translate it into how you play your instrument. I am not feeling that from these guys.
To their credit they are not playing the tried-and-true death doom. Ther are none of the European bands who started this kind of thing flowing in their veins. They get better at guitar solos by the time we get to the last song. There is also a more tangible Morbid Angel influence present which is a key selling point. They prove themselves more capable on the last song than they did on the first two. They are not a bad band but are they ready to hang shoulder to shoulder with the likes of the other bands covered this month, not likely. I will give this album a 7.5, as what works has already been pointed out no no need to repeat myself.This album is being released on EVerlasting Spew.
Posted by Wilcifer at 7:15 PM