Haunt : " Windows of your Heart" 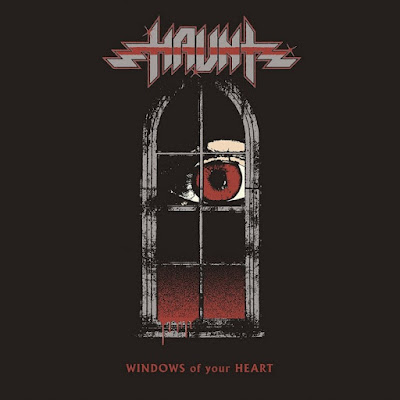 Been a fan of Trevor Church since the Beastmaker days, and of all the bands doing the retro middle of the road NWOBHM thing, these guys have been doing it best. The opening track is marginally moodier and darker enough to make me happy as some of the previous albums under this moniker flirted with heading in too happy and upbeat a direction. The whole major chord thing never resonated with me, even when Judas Priest does it. "Running Hard" finds him adding a little grit to his voice in the punches, but the chorus is brighter than the previous song, so it does not catch me in the same way.  "Barricade" might not pack the same punch, and something is weird in the overall production of this album, but it works better than "Running Hard".
While I like "Father Time" it felt like an extension of the previous, so there is a uniformity of sonic going on that is causing things to bleed together a bit, so could stand to hear more dynamics. Instead, things begin to take on more of a Van Halen feel with the title track. I suppose this could also be compared to Thin Lizzy , but there is some Vah Halen nuance to the guitars even with the guitar harmonies in the mix. There is more of the Van Halen feel but set against more Diamond Head like metal, that brings things together in a more effective manner for what they are best at. Guitars are more thrashing on the faster "No Control".  "Dream on It' is hookier and reminds me more of the first few albums he released as Haunt.
"Frozen in Time" works within the wheelhouse of what they do and while I will not go as far to call it filler, I am not sure if it catches me as inspired as when these guys are on their A-game. There is more of a foot on the monitor 80s feel to "Defender" that closes out the album. Overall, this album works really for what it is, I will round it down to a 9 as it could use a wider range of sonic colors to provide a more dynamic range. But even these guys on cruise control are better than most bands can to at their peak.
Posted by Wilcifer at 2:33 PM