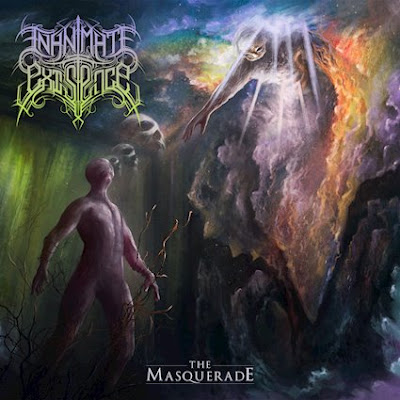 If you are hungry for death metal guitar heroes, this band has you covered. Normally the more technical and progressive sides of death metal can feel to clean and wanky for me, but these guys have all the guitar spectacle you might want but are doing it in a way that is very tasteful and blends jazz in. They are more aggressive and less creative on the second song, the speed of their attack being more of the focal point. The guttural growl of the vocals has a purpose even here. The sweeping guitar solos rain all over the second half of the song. I feel they did this in a manner with more soul flowing from it on the first song. The more technical aspect of the second song finds some of that soul sterilized out.

"The Masquerade" wrestles with itself as there is a flurry of furious speed, then they are making even more interesting guitar melodies with other atmosphere haunting the edges of the song. On top of that they still have to squeeze guitar solos in. Midway into the song, their jazz chops come through again. They could stand to lean into some grooves. While playing this fast might impress many a teenager it does not always lend itself to the best song writing. There are hints of neo classical on " Into the Underworld" . Here they guitar begins to make me dizzy When they resolves in the chugs it works better.  For this song to be just under six minutes they cover enough ground to wear the listener out. I was a couple minutes into "Wandering White Halls" before I realized it was not an extension of the previous song.  Telling me that there is a uniformity emerging even as they indulge in the pretense of being progressive. Their strength being the weighty chugs that anchor it amid the wanking wandering.

They lock into more of a groove on " Return to the Dream' . They find a head banging groove to root the song it and color it with more exotic guitar phrasing.  "Hear of the Inferno" only has a few more tricks up itself than the bulk of mainstream modern death metal. The guitar is tasteful for a genre that celebrates instrumental excess. "Ending the Ritual" follows a similar formula to the previous song , but it is also faster and heavier.  I will give this album a 9, what they do is impressive and while I normally do not like what they do as far as the technical aspect they have refined it in a manner that is not over produced and still has the needed edge to it.