Death is June- Church of Disgust: "Weakest is the Flesh" 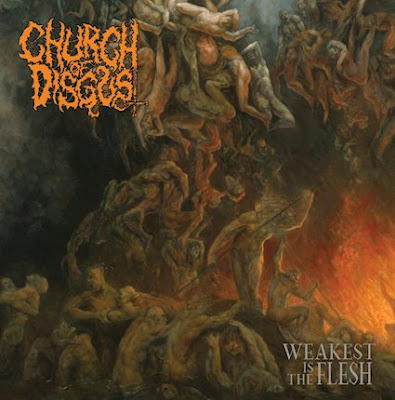 The third album by this Texas band finds them staying almost too true to who they are. Yet there is a charisma to what they do perhaps it is evident in the pacing of the vocals or the hooks of the riffs that they still care about the songs. Cannot really say they sound like any one band in particular though obviously influenced by all the gritty guttural forefathers of the genre perhaps splitting the difference most closely between early Morbid Angel and Incantation.  What is key is they do not just bull doze you with a freight train of aggression and leave it at that.

While the second song falls closer in lines with the hyper aggression of most death metal and falls along the normal party lines. It is not until they go down a darker and more deliberate path that things open up for them. The mood is what sets them apart. When you are heading into a month where you review over two dozen death metal albums, you need to hear what makes bands like these stand apart rather than just being a sound, I am fine with the random obligatory bursts of blasting speed as long as they are thrown in as another shade of red to color the song with. Things turn in a more Morbid direction with "Seeming Unnatural Infestations". The faster parts are more hurried. The main riff is pretty cool in how the double bass flows beneath it.

They have an interlude with some interesting clean guitar tones that would be more interesting if found in an actual song. Instead, the beatings continue until your ear's morale improves. "At the Pillar of Souls" has a more deliberate feel to the punches that help give a different feel. Dive bomb guitar squeals into "Humiliated Remains". There is a more grinding tone to this dirt encrusted ditty. There is a cool riff in the song's third act, but the rule around here is cool riffs alone does not a good song make. I am always disappointed when a song about gods from the Necronomicon is just blasting as usual and nothing spooky to stick with the subject matter. Hell, I will even take ritualistic. It is a missed opportunity to get darker. At this point the Morbid Angel worship is impossible to ignore. They title track is more powerful as the chug is more mid paced. Almost a death doom type feel. I will give this album an 8.5 as they are good at what they do I just already own what they do in the form of other bands and while this album was a fun listen do not feel compelled to listen much beyond the purpose of this review, though if you are into Morbid Angel and Incantation, you might dig these guys well.