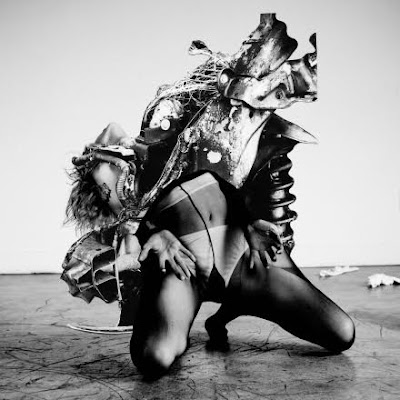 This project gets right what many of the industrial revivalists downplay at best, altogether ignore more often than not, which is the influence metal had in brining industrial music to the masses. There is far too little guitar in most. Here there is not only more guitar, but more aggressive vocals that pack a heavier punch with their anger. All of the iconic elements come together in perfect apocalyptic unison on " Floating in Nothing". There is darkness, there is abrasion, there is a militant machine-like sound that bull dozes you. Things go down a spiral on "Incubate" with bigger beats that carry an unsettling tension. Normally when bands dig into this sort of thing these days they are bringing with it more nu metal vibes, which this is thankfully devoid of.

The denser crunch of angry robots that bands like Godflesh are known for emerges on "Hermetix" . The vocals are at a whisper as the chant formed slithers of the hammering. The song writing here is worth noting as things ebb and flow rather than drone off one relentless stomp, The overzealous attack of "Wolverine Dreams" is effective, but perhaps not as effective as the previous songs on the album. The groove of "Body World " sounds like it could have writhed out from under the 90s. It packs an impressive punch while being equally focused on being as song rather than collection of authentic sounds of the era. I think the album's only missed opportunity is not making "Sold Me Sad" and "Last Curse" into one song , as it feels like the more brooding first part needs the kind of dynamic shift that the aggression of " Last Curse" could have provided if they had been arranged together in that manner . There is a very Nine Inch Nails feel to where it goes.

The album ends with the ambient noise of the track "Dowsing" then there is a remix by Justin of Godflesh. While this is cool, I am not counting either for the purpose of this review. This is an excellent album that delivers what you missed out on in the 90s. I can only guess this might be because the brainchild of this project. James Hammontree, is doing the same drugs, or was at least around to see the birth of this sound the first time around,. Sanford Parker, produces this album and puts all the sounds right where they needed to go. I will give this album a 9.5, it comes out July 29th.