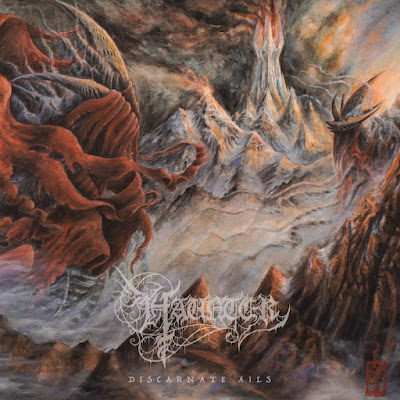 The third album by this band from Texas came out in early May but I held off on reviewing it until this month. consists of three sprawling songs. The shortest of them is just under seven minutes and is bookended by songs over the ten-minute mark. If this was a doom band that would seem pretty typical these days, but for death metal they play at speed that normally get them there much faster. These guys often invoke a very surreal sprawl of sound. The vocals are at a low growl while the dissonant guitars clang and churn around it. This is an album where the cover is an apt description of what the music sounds like within.

The second song "Spiritual Illness" is more focused. At just under seven minutes, it is not like they stopped indulging in their full sonic sprawl. It is less of a labyrinth and more of an in-your-face attack, while still basking in the atmosphere of the shadows it reverberates within. There is still a great deal of chaos in the tempest of sound. The drums could be more present in the mix on this one. The vocals also sound like random growling rather than having any roots in the actual song. They break out with some taunt galloping here and there. Though the rule here is cool riffs alone does not a good song make. The guitarists are highly skilled and turning these riffs around to jump from the turbulence the song builds.

Sometimes the growls rise up in a layer scream. The shifting time signature on the last song, keeps the hypnotic swirl flowing. The tense chugs offer a marginal dynamic shift from their normal trippy attack. I like how this album is produced things sound like they are coming at you from other dimensions. Three minutes into the song we get a wandering guitar solo that explores a more jazz like realm of shred. Not what you think when progressive death metal is mentioned though, I think the label applies to what is going on here. When they hammer into the blast beats the results are not a great deal different than any other form of death metal. I will give this album an 8. I appreciate the dark and murky mood summoned by the atmosphere I just wish a measure of it was restrained enough to focus more on song writing. It was released on Profound Lore