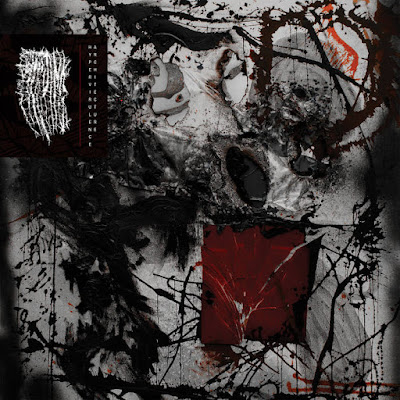 Seattle based Hissing churns out a violent brand of dissonant death metal but manage to throw in a few head banging riffs amid the chaos. They are so heavy when the first song hits you that you are unsure how their skills as actual songwriters are. The first song ends with noisy rough edges of feedback squealing out to add to the sonic abrasion. The second song starts with a murky barrage of blasting. If you told me these guys all also played in punk bands, I would not be surprised. The vocals are a low growl and mixed behind the guitars which is one aspect of their sound that works. Some of the faster sections feel rushed. The guitars are more of a static distortion than hearing any note with clarity in the grit. When I was younger, I would have dug this more, but really did not know better.
"Operant Extinction" is more of the same. Fast drumming and growls that seem more obligatory than providing any kind of narrative. Even the riffs seem more sidetracked by being a force of intensity than a song. At over ten minutes it is hard to hear at the four-minute mark where they plan on taking this spastic outburst for another six minutes. normally these guys keep thing compact around the four-minute mark, some of this due to the speed they attack things with. They shift gears into a more sonic pounding but return to variation of what they have already done up to this point. The is a more of a sonic heaviness in place than just the slamming of guitar into your ears. this is also a little more angular and less of a straightforward assault. They kind of drone on this until going into more of a mathy chaos. The last minute is also more sonic which helps.
After the ten-minute sparling epic there is an industrial tinged interlude before getting back into the actual songs. "Intrusion" is at least as brutal in the beating it gives you as previous songs. They way the song breaks down in the final two minutes might be the most interesting part of the song as things have more room to breathe. From the onset of it's explosion "Identical to Hunger" has a plan of attack similar to the other songs on this album. In some ways it sounds like it could be even more feral if not for the very deliberate punches it drops into. This does sound less rushed and more intentional which is a step in the right direction. When the y step onto the speed it feels like a step backwards. "Meltdown" is more of the same. A very similar expand and contract as the previous song. Three minutes into the song and things break down to the crusty sludged out bass line. They way the song fades out into noise sums up where it stand in being more about sounds or a song. I will give this one a 7.5, it is comings out on Profound Lore/.
Posted by Wilcifer at 7:59 PM