Death is June- The Sombre : "Monuments of Grief" 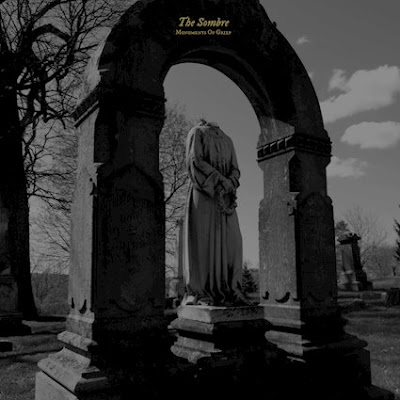 One man band Maurice of Gnaw their Tongues, Cloak of Altering and a score of other more obscure dark and droning projects is not paying homage to the Peaceville three with his newest project. It is almost closer to funeral doom in how the first song drags and the mournful layers of guitar weeping melodies upon the otherwise sparse production and minimalist accompaniment in terms of drums and bass. It is not an unpleasing collection of sound, he just seemed to miss the emphasis those three bands had in terms of songwriting which really set them apart and brought to life the death doom genre. The drums are rather minimal, and I often find in these one-man band scenarios that they are either a drummer playing guitar or a guitar player playing drums, the latter seems to be the case here, though there is more of a conventional songwriting approach to the second song rather than just laying back in the gloom.

The big difference between what is happening here and the bands it is paying tribute to, is the vocals are not as purposeful. He gets credit for being more song focused more than the normal experimental ambiance he overindulges in. "The Mourning Gloom" flows but it pretty much just sounds like every funeral doom band under the sun. The guitars have a more flowing sound on the title track but the vocals remains at a obligatory gurgle. By the time we get to "When Death Comes I Will Be Beside You" gets mired into the formula that is being milked to earth while he is beside us. These kin of guitar melodies are cool , but there is only so much they can do on their own.

The last song does not stray far from what he has been doing over the course of the album. he just happens to do it more effectively on this song. Not an album I will listen to outside of this review process, but it is the best thing he has done from the sense of songwriting, and creating something melodic. I will give this one an 8 which is fair considering the space it occupies, fans of death doom and funeral doom will enjoy this if they want to keep it simple.

Email ThisBlogThis!Share to TwitterShare to FacebookShare to Pinterest
Labels: 8, death doom, Gnaw their tongues, the sombre