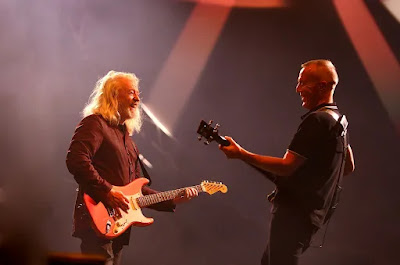 Like most concerts over the past year it has been my first time at the venue. It was a weird mix or the fair and a your normal Live Nation run shed. We sat in the covered seating to the left of the sound board. It was still daylight when Garbage came on. They were a mixed bag. Shirley Manson is aging better than some. Many of the big hits they tried lounge versions of at first to paced themselves and then busted into something closer to the real thing by the second chorus. The best thing about their live show was the more organic nature of it and how you could hear they were basically a post-punk band in the 90s who was fortunate enough to have a producer in the band that was able to give it a radio sheen of aural candy to fit onto 90s pop radio. Some of their newer deeper cuts on the set, might not hold up their classic work. 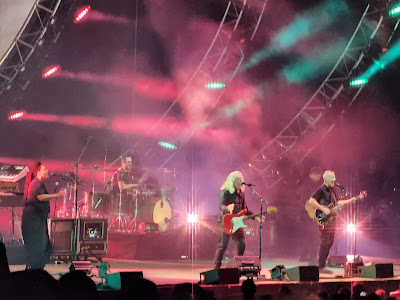 Tears For Fears took the stage in a fairly understated fashion that I am not sure the crowd knew how to react to. Roland Orzabal came on strumming an acoustic guitar playing the western tinged folk of "No Small Thing" the opening track from their new album "the Tipping Point". It gave Curt  Smith time to warm up his voice with backing vocals. Though when it came to his first solo vocal in "Everybody Body Wants to Rule the World" something was off.  It seemed he had trouble falling into the phrasing. I t could have been a problem with his in ear monitors, though his voice was straining, there is always a tendency as a singer to not project if you cannot hear yourself since that is a good way to damage your vocal chords. You could age at age 60 it is just the normal decline, but Roland sounded better than ever. When the two were singing together Kurt hit all the note , and later in the set on songs like "Pake Shelter" he hit some higher notes, it sounded more like problem with shifting from his chest voice to head register as fluidly in the weird middle space like on the phrase "you don't give me love" though the falsetto phrasing was fine it was odd and since I have Googled to see if he is dealing with hearing loss and found nothing. 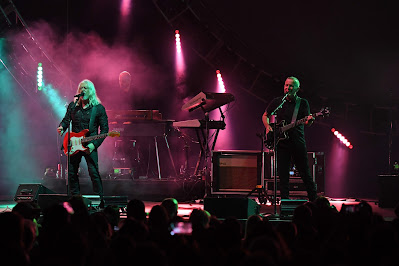 They were unapologetic in promoting the new album and playing 7 songs from it, which was fine with me since it is a great album that sits well within the context of their body of work. The crowd was a little perplexed by this and really only took to their feet for the big radio hits, obviously they left "Shout" for the last song. But it was perhaps the less radio dominating classics like "Sowing the Seeds of Love" that might have been the best moment. I hoped for "Raul and the Kings of Spain" and would have gladly traded "Woman in Chains" for it.  I do admire Tears For Fears for not just relying on the nostalgia of greatest hits. The new songs worked well live with "My Demons" serving as one of the best songs of the night.  "Secret World" off "Everyone Loves a Happy Ending" was also one of the sets better moments. When it came to crowd pleasing classics "Pale Shelter" worked better than 'Mad World". Anytime Roland belted it out of the park with his big soulful voice to was also a shining moment. One of my favorite new waveish bands from the 80s, and one of the few hold outs that i had not seen yet,  not a flawless performance but a pretty great one.
Posted by Wilcifer at 7:09 PM